Last week (25/04/2017) the Belgium Technical Cooperation and the National Directorate of Water Supply and Sanitation (DNAAS) organized the first national conference on desalination in Mozambique. The high-profile event took place at DNAAS, in Maputo, and was led by the National Director, Mr. Nilton Trindade. The morning was devoted to offer a general view of the situation regarding water resources in Mozambique, with desalination being presented as a potential solution; whereas in the afternoon four different companies pitched their technological offers for desalination and gave examples of previous projects throughout the world. I am now taking this opportunity to share some thoughts about the conference in general and about desalination in particular.

1. Preamble
Very briefly, water desalination consists in removing most of the salts and minerals from a given water source and is common practices in several countries around the world, with the US, several Arab Monarchies, Israel and Spain being world leaders. For a very good introduction on the topic I recommend following TU Delft’s course on Nanofiltration and Reverse Osmosis in Water Treatment.

I do not wish to delve into the pros and cons of desalination in general but I can say that I believe that desalination should be seriously evaluated as a potential alternative for water supply to the Mozambican capital: Maputo is located in a semi-arid area, very close to the sea and it’s possible that given the very large gas reserves in the North, “more than three times the reserves left in the North Sea” (more here), the process may become relatively cheap – still more expensive than the current process. I also understand that desalination would allow immediately addressing the current and future droughts. Also, and maybe this is too much wishful-thinking, I can even imagine that if the issues around water supply to the city were solved, decision-makers would further focus on improving the access to adequate sanitation services. In any case, there are the issues behind implementing sea/ground-water desalination in a country such as Mozambique and I would like to focus on these. 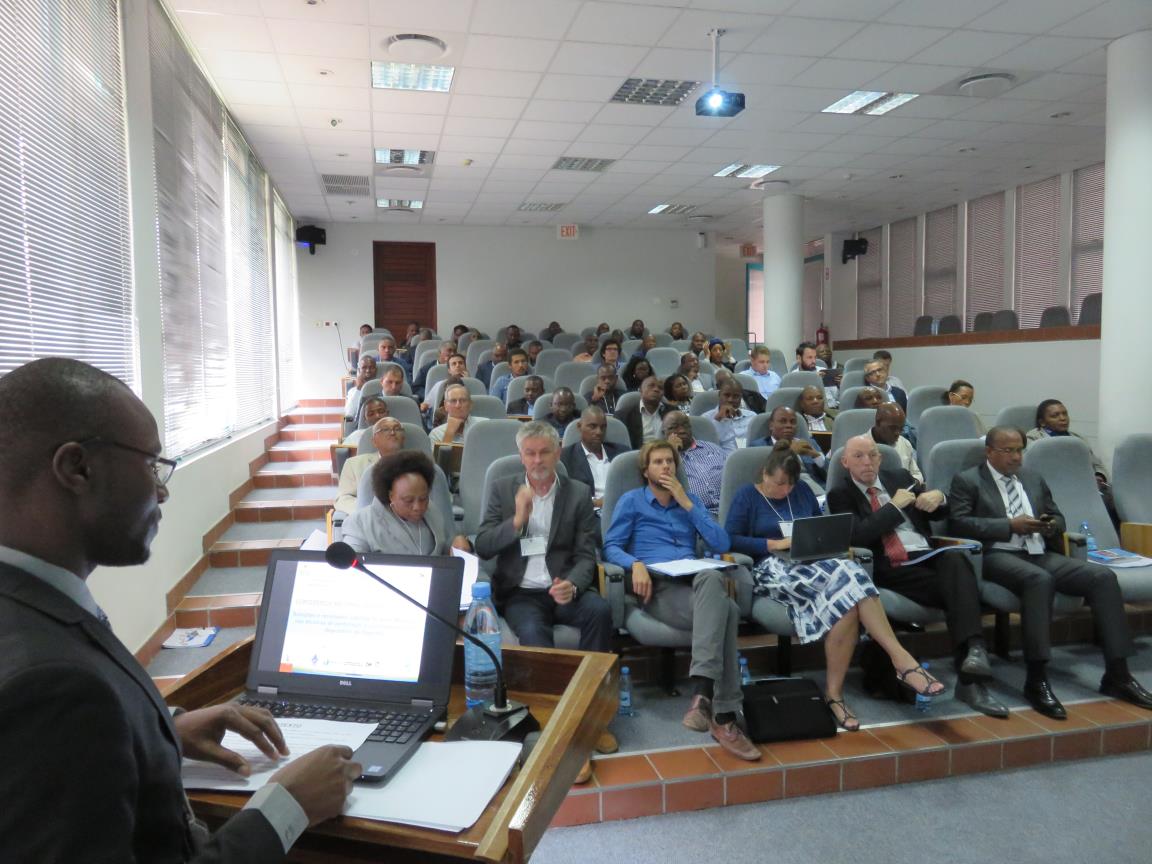 Overview of the conference attendants at DNAAS. Photo by CTB, Belgium Technical Cooperation.

2. The conference
Despite several references to Maputo and to other large Mozambican cities, the conference had a strong focus on desalination for rural water supply. In fact, preliminary studies presented in the morning showed several examples of water sources with 2,500-3,000 mg/L of TDS, with a legal limit of 1,000 mg/L, following WHO’s guidelines. Needless to say, serious thought should be put into addressing this situation. Thus, a great emphasis was given to the desalination of saline groundwater, much more than to seawater desalination.

As I stated above, I understand that the conference was focused on rural supply and I was remembered of that after one of my comments. In any case, the example of supplying Maputo with desalinated water was indeed mentioned in one of the presentations. Also, in recent (beginning of 2017) official government documents defining strategies for the future supply of Maputo, desalination is mentioned throughout including potential locations for desalination plants in the city. Finally, in the newest version of the National Water Policy (30th December 2016) desalination is also mentioned as a way to offset water scarcity (my translation, my highlight):

The deficient geographic distribution of water resources management in Mozambique and in the region, in many cases originating large deficits regarding water needs, shows that intra- and inter-basin water transfers and desalination are a potential solution that should be studied taking into consideration technical, financial, social, environmental and sustainability aspects.

To me this shows that desalination, probably with the support of an international donor, will become reality in Maputo within the next few decades. Therefore, and despite the focus of the conference in rural supply, I will focus my analysis on the city of Maputo.

3. My argument
As I mentioned above, there’s a huge potential for desalination to solve the problems around water supply to the city of Maputo, I can identify one main issue regarding the implementation of desalination in Maputo: what is the foundation to implement desalination and how can we push it forward before, i) defining and enforcing strict environmental protection legislation, ii) put forward innovative legislation on water demand management, and iii) reduce non-revenue water? This was also my point during the conference and I’m now taking some time to further expand this discussion. My point is also encapsulated by the following WSP’s cartoon: 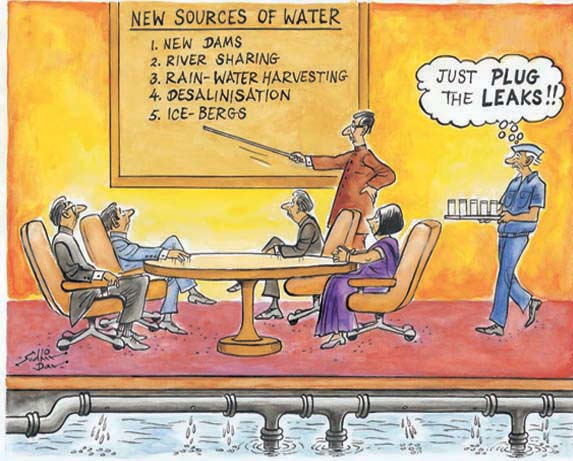 Isn’t it obvious that expensive technical solutions should only be attempted once a distribution network is operating well? This was the May 2002 cartoon for the famous WSP calendar.

3.1 Environmental protection legislation
Despite having comprehensive legislation regarding environmental protection (here’s an example regarding limits on the discharge of wastewater into the environment), its enforcement is very limited. The perfect example is the problems behind wastewater management in the city of Maputo: most of the wastewater produced in the city is directly discharged into the environment without treatment (for more information check Justus and Thijs’ work; in brief: of the ± 25,000 m3 of wastewater produced each day in area of the city covered by the sewer network, only ± 5,000 m3 reach the wastewater treatment plant, if the two pumping stations were operating, this volume would double (± 10,000 m3). If this is the situation in the country’s capital, I wonder how well the waste streams produced by a desalination system will be treated or whether they will be treated at all. For the case of Maputo I can imagine that a sea outlet for the concentrated brine would be the chosen solution; I’m not going to discuss the pros and cons of this approach but, I admit, this heavily minimizes the environmental impact, especially is we compare this with the disposal of the concentrated brine in inland regions where retention ponds would have to be constructed and maintained.

3.2 Demand management
As I stated above, I believe that desalination will become reality in Maputo in the next few decades. My question now is: how is this water going to be used? Can hotels still use power showers? Can people continue to have swimming pools? Can the Municipality keep on maintain grass lawns throughout the city? In my view, legislation should be put forward and, as much as possible, enforced regarding demand management, with non-priority uses being limited or altogether forbidden – this is nothing new, similar approaches have been tried in California (more information here and here) and in Namibia (see picture below) 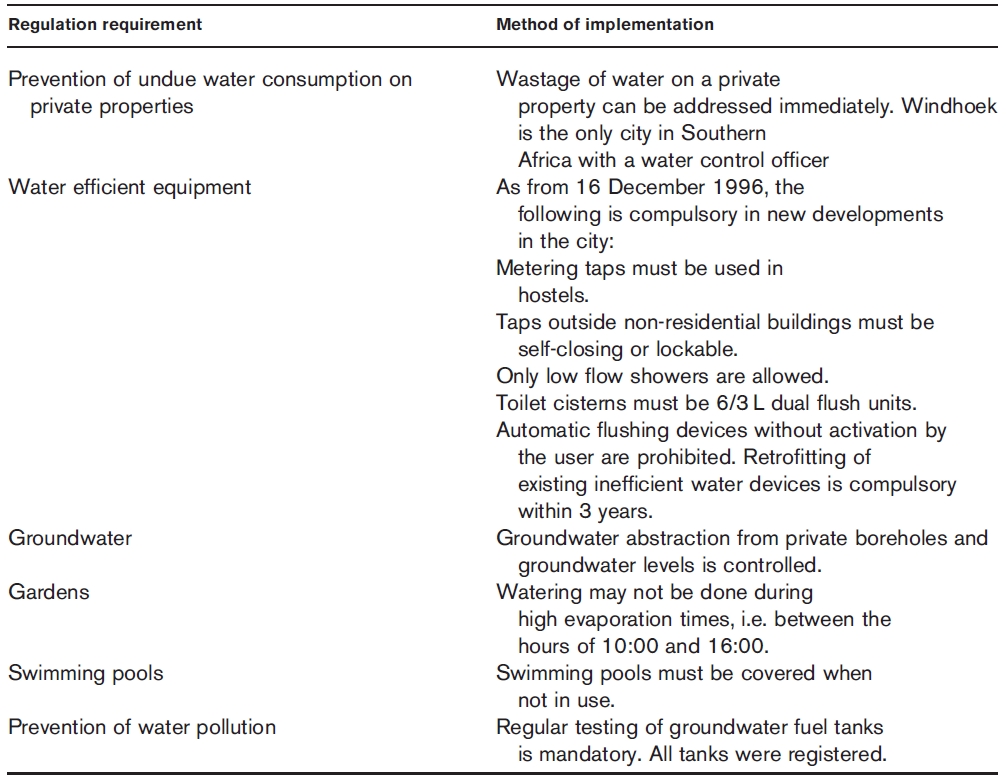 Requirements of the water supply regulations and method of implementation. Obtained from Lahnsteiner and Lempert (2007).

We often talk about leap-frogging development and this often involves the development and implementation of new technology; in this case Mozambique could leap-frog development by implementing innovative legislation. I try to convey this message as much as possible and I believe that it’s the easiest way for a country with limited resources to identify “new” water sources.

3.3 Non-revenue water
This is very connected to the previous point. In the city of Maputo more than 40% of the water produced becomes non-revenue water or NRW (see chart below), water that is either lost (half of the total NRW), which is known as physical losses or more commonly leakage; or water that is not billed (the remaining half of the total NRW), for example is stolen. In others words, of the 200,000 m3 produced each day at Umbeluzi water treatment plant only 100,000 m3 reach its intended destiny. Is this the network that we want to use to convey desalinated water produced at a premium price? I don’t think so – serious thought should be put into refurbishing and expanding the existing network.

Unlike other large cities in Mozambique, the situation regarding NRW in Maputo has been improving for the the last years. Nevertheless, more than 40% of the water produced in Maputo is lost before reaching the consumers (red line), quite above the reference value of 35% (light blue line), a not very ambitious objective by itself. Retrospective report for the years 2009-2014, available at CRA.

Another point of discussion could be how feasible is the implementation of desalination at rural level given the complexity of the technology, the limited local expertise, the access to spare parts and the known issues of accessing electrical energy? In any case I decided to leave this out and focus on the issues of desalination for the city of Maputo, where our main project is based.

4. Final thoughts
I admit that the message and tone of this post is very much related to my last one about the cholera outbreak in Maputo and that’s not really surprising: plan public expenditure and expansion of public infrastructure is of the utmost importance and this is even more the case in countries with limited financial and human resources. In the case of cholera my argument was that the route that is being followed at the moment will certainly not avoid future cholera outbreaks; this time around I try to make the point that there’s a long road before starting a serious discussion about desalination. In both cases the bottom-line is: we need to know where we want to be in 30 years so that we can know what we have to do tomorrow.

On the other hand, for Maputo, where there’s a lot of work to be done in improving water supply services, desalination is the easiest route: let’s not change anything about how we manage our assets and let’s not change anything about how we live our lives. This is far from what environmental or economic sustainability is: there are many actions that can be taken to minimize the impact of the current and future droughts before identifying new water sources

Nevertheless, something that I enjoyed being discussed during the conference was the potential of desalinating WWTP effluent for human consumption. This is a step forward on our water reclamation project – we only aim at industrial use and irrigation and it’s perfectly safe and a reality in other countries, with Namibia being the obvious example for its proximity. However, for this to be implemented the expansion of city’s sewer infrastructure (e.g. following the project of the city-wide sanitation Masterplan) would probably have to be reconsidered. Furthermore, I know that common hurdle to production of drinking water from treated wastewater is public acceptance but there are ways to circumvent this, for example using the treated wastewater for aquifer recharge. On the upside, desalination of treated WWTP effluent would necessarily translate into an improvement of sewer coverage in the city. Also, often desalination of pre-treated wastewater becomes cheaper than that of seawater and of saline groundwater due to the lower salt content.