By now you might have read that there’s an ongoing cholera outbreak in Maputo and in a couple other cities and regions in Mozambique – four in total.

1. The current situation
In the plot here below I’ve depicted the total number of new cases per week until last week, in total 12 weeks. These data are public and were obtained from the Ministry of Health: by 31 March there were in total of 343 cases in Maputo city, 131 cases in Maputo province, 560 cases in Nampula  and 868 cases in Tete province. These cases originated three deaths, one in the city of Maputo. Several international NGOs are supporting local institutions, in particular Municipalities and the Ministry of Health, in addressing this situation, for example, offering hygiene kits to households, disinfecting homes and setting-up emergency hospitals. 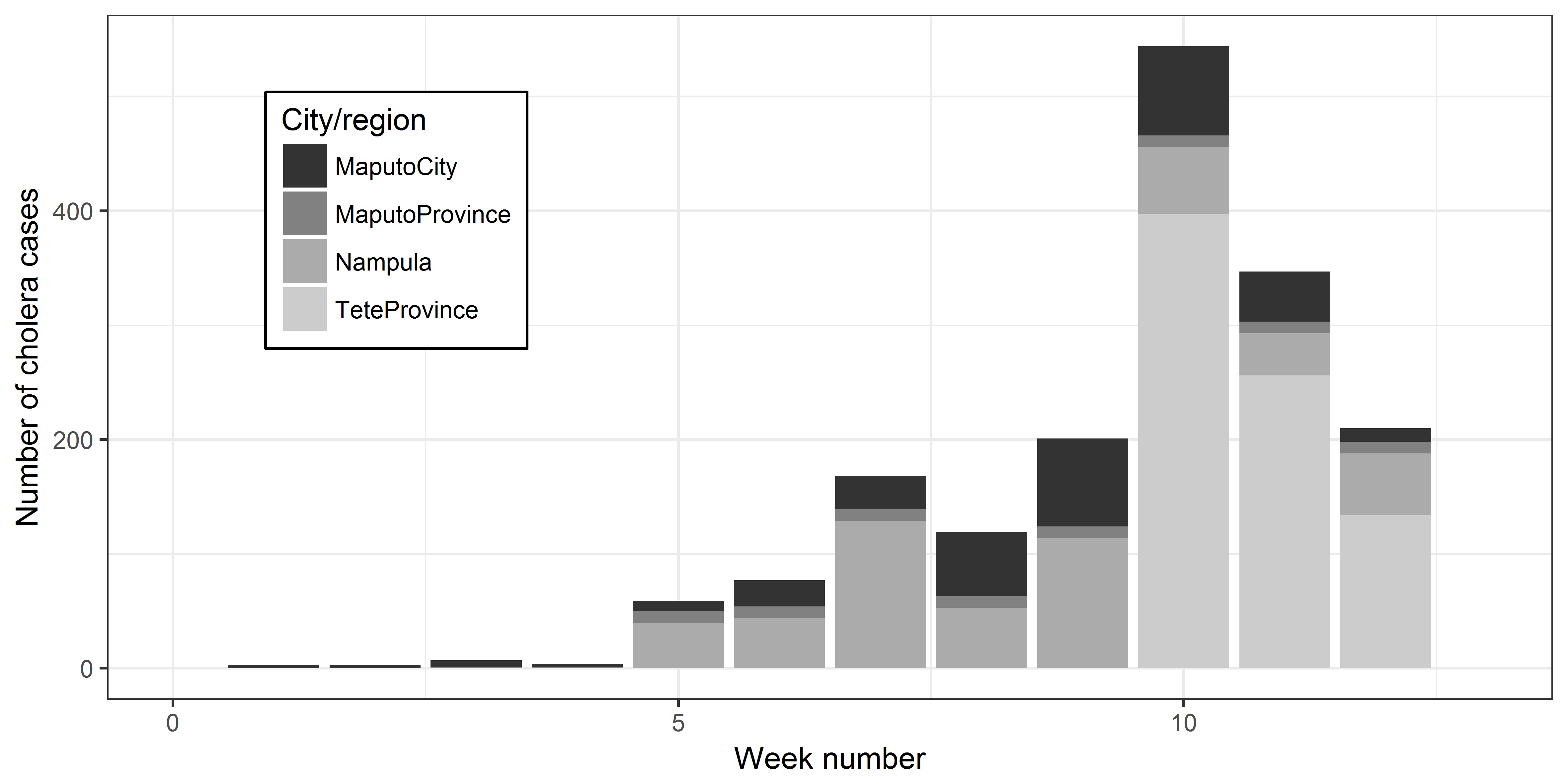 Total number of new cholera cases per week until last week (6th April) in four cities and regions in Mozambique. Data obtained from the Ministry of Health.

Undoubtedly, cholera is linked to insufficient hygiene practices and most of the cases can be avoided with hand-washing before eating and after going to the bathroom. Despite this I do feel that the disease is very stigmatized – here in Mozambique it is often referred to as “dirty hands” disease (doença das mãos sujas, in Portuguese) – and I do think that this stigma is counter-productive. It places too much of the responsibility on the households, whereas I argue that the main reason for this outbreak was limited access to sanitation services compounded with a serious drought that is currently affecting Maputo; a third factor was storm Dineo that disrupted water supply in some areas in the South of the country, particularly in Inhambane. To prove my point let’s look at some literature.

2. Cholera outbreaks in literature
To better understand cholera outbreaks and their links to water and sanitation I’m going to present one of the most famous cases in history, the 1854 Broad Street cholera outbreak. This outbreak, killed more than 600 people and is best known for the physician John Snow’s study of its causes and his hypothesis that contaminated water, not pollution or a noxious form of “bad air”, spread cholera. In England in particular this discovery came to influence public health and the construction of improved sanitation facilities beginning in the 19th century. You can read more about it here. For me, and I know that I’m not alone, what is most groundbreaking in Snow’s work was the use of maps (see below) where he depicted cholera cases (black dots) to reach the conclusions that the hand-pump on Broad Street (center of the image) was the origin of the contamination. Now tell me, from the perspective of research: how beautiful is this? 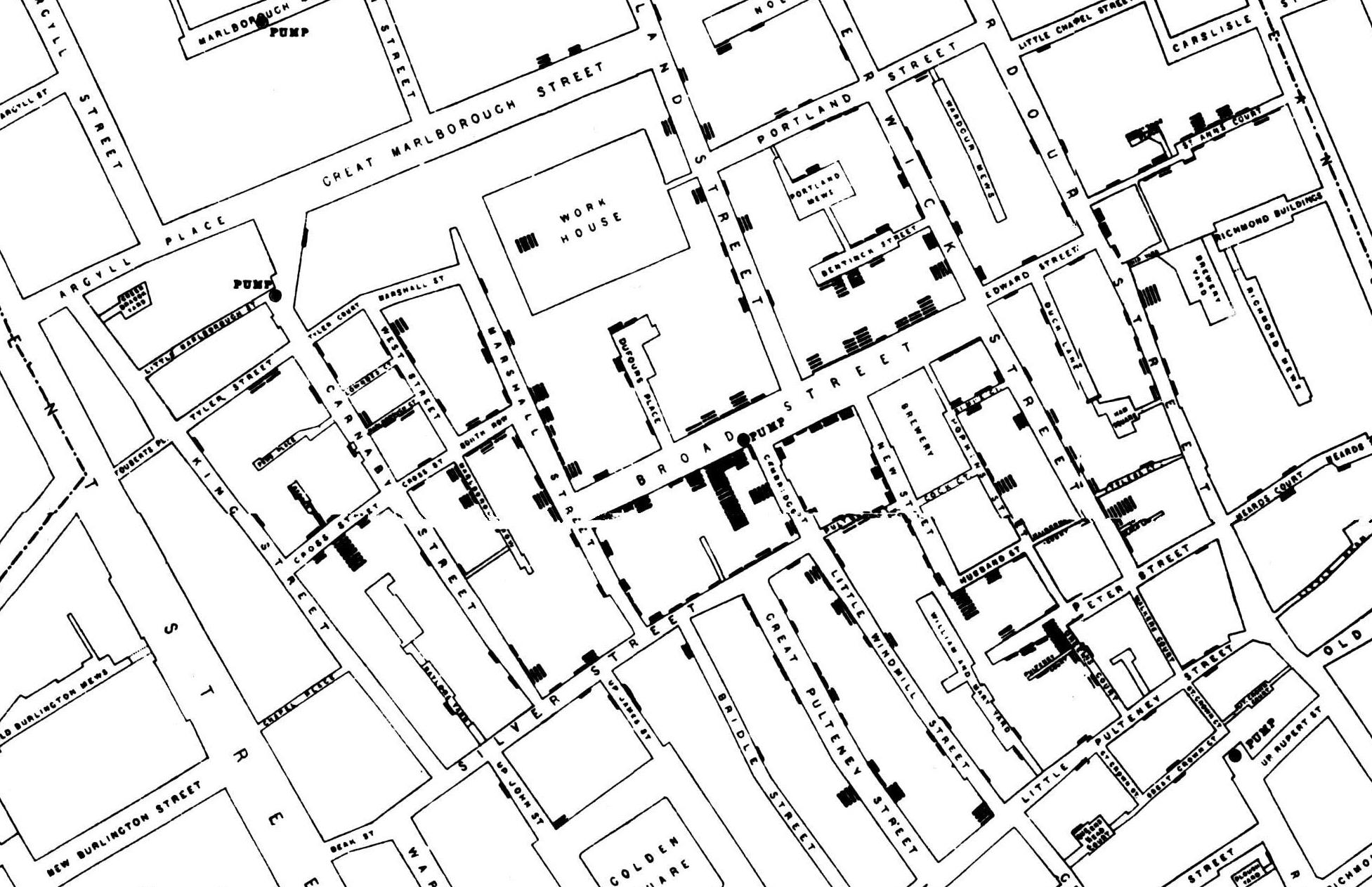 A crop of John Snow’s famous map where cholera cases are indicated by black dots as well as the contaminated hand pump (center of the image on Broad Street). Obtained from Wikipedia’s page on 1854 Broad Street cholera outbreak; and here you can find the original map.

But it’s not only Snow’s work that shows this link and it is not a surprise that WHO clearly states that (my highlight):

Cholera is an acute enteric infection caused by the ingestion of bacterium Vibrio cholerae present in faecally contaminated water or food. Primarily linked to insufficient access to safe water and proper sanitation, its impact can be even more dramatic in areas where basic environmental infrastructures are disrupted or have been destroyed.

More recently Jutla et al. (2013) studied the cholera outbreak following the earthquake of 2010 in Haiti reached similar conclusions to those of Snow (my highlight):

Epidemic regions are located near regional rivers and are characterized by sporadic outbreaks, which are likely to be initiated during episodes of prevailing warm air temperature with low river flows, creating favorable environmental conditions for growth of cholera bacteria. Heavy rainfall, through inundation or breakdown of sanitary infrastructure, accelerates interaction between contaminated water and human activities, resulting in an epidemic.

3. OK but now what?
I know that all that is being done at household level is necessary and is working: in fact, as you can see in the first plot above, the total number of new cases has been decreasing for the last couple of weeks; but I would like to see a more general discussion regarding what brought us here and how can these situations be avoided in the future. In other words: what should we start doing tomorrow in order to avoid emergency actions for cholera outbreaks in 2018 or 2019? 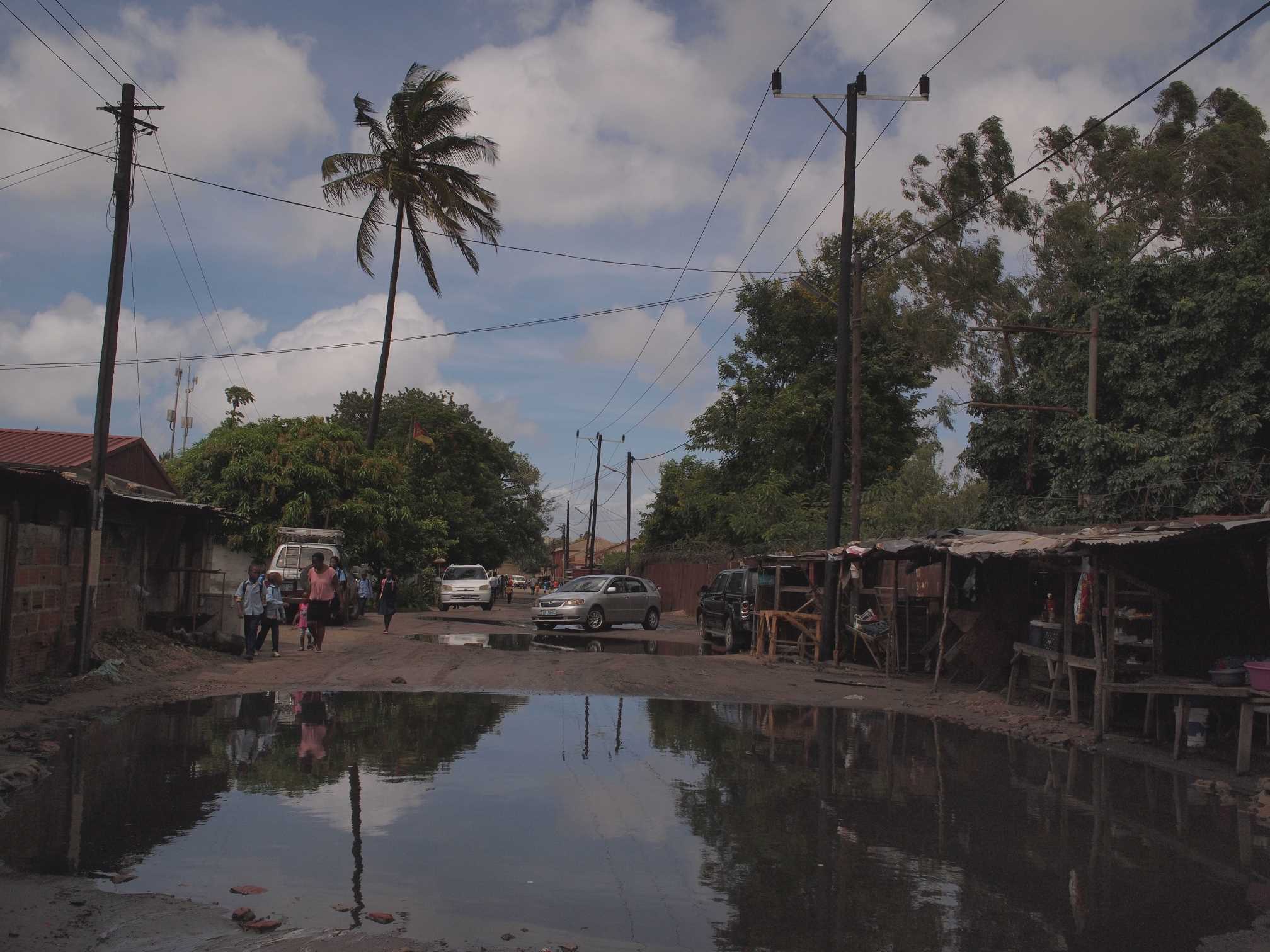 Poor urban drainage in Aeroporto B. Most of cholera cases in Maputo were detected in neighborhoods with poor sanitation services. Photo taken on the 17th of February 2017 after a rainy day.

3.1 Sanitation services
To me it’s not a surprise that most cases in Maputo were detected in urban districts (KaMavota, 74 cases; and KaMubukuane, 139 cases; 62% of total; check detailed plot below for the city of Maputo) that are not covered by the existing sewer network, where households often have limited access to proper sanitation services, and typically rely on informal fecal sludge operators to empty their latrines by hand with buckets. I argue that this cholera outbreak would be the perfect spark to start a comprehensive discussion on sanitation services in Mozambican cities: what can be done, what are the current plans and whether these are expected to address problems such as cholera outbreaks. Unfortunately, I have serious doubts that they do. 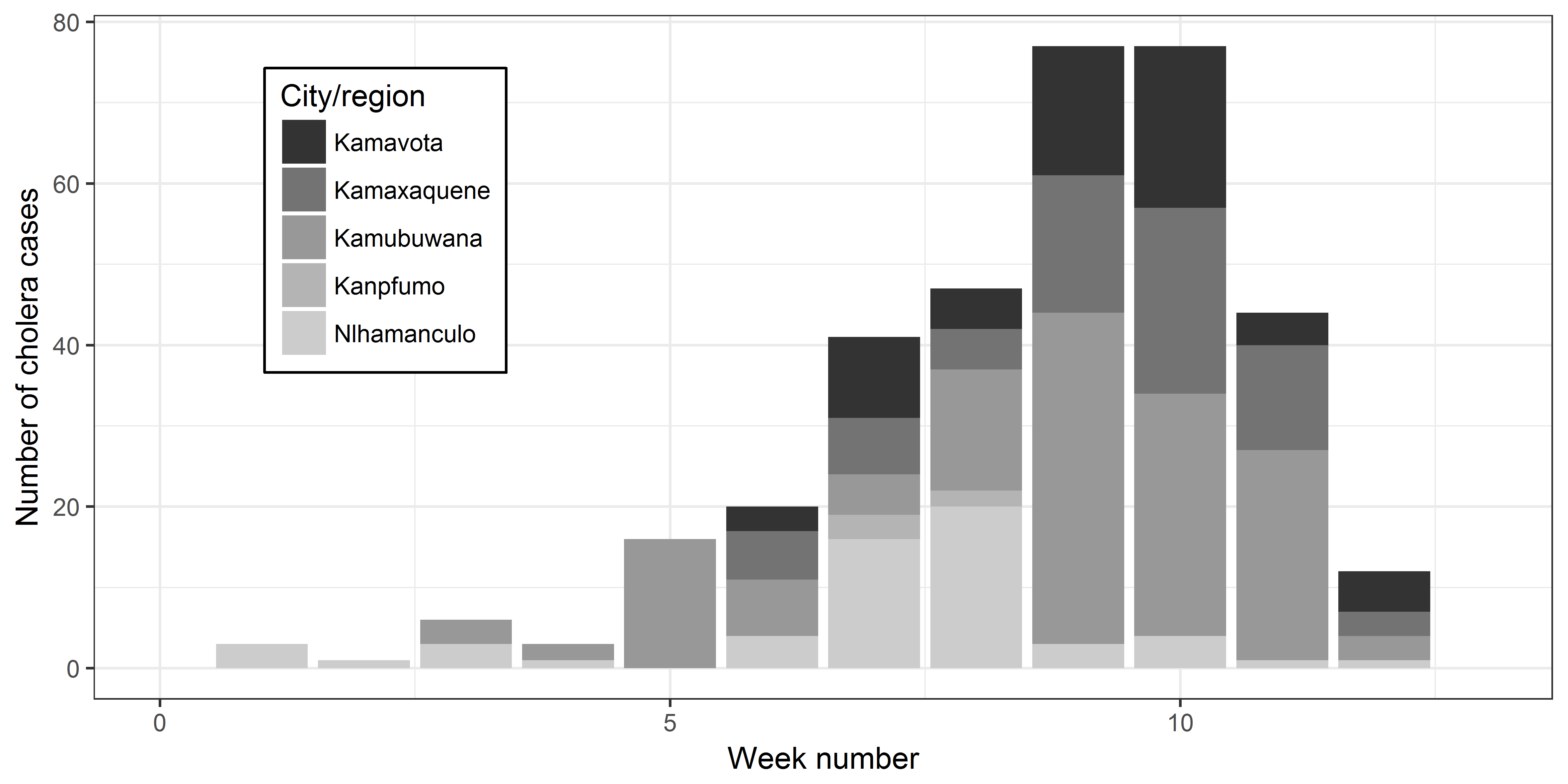 Total number of new cholera cases per week until last week (6th April) in the city of Maputo. Districts KaMavota and KaMubukuane lead with more than 60% of the cases. Data obtained from the Ministry of Health.

3.2 Water supply
But it’s not only sanitation, this situation is also intimately connected to the current drought (more about this on a forthcoming post). In brief, the city’s population receives water at home on alternate days, meaning that on one day I have water from around 4am until around 9-10am and that on the day after there will be no water. However, some people are in a much worse situation – due to the characteristics of the drinking water supply system some area of the city do not receive water for up to a week. Needless to say, this leads to very unhygienic practices, and some people have started collecting water from open drains in the city. You can read about it here and here, both in Portuguese. I can say that I am not at all surprised if some of these cholera cases originated from these practices. What should be more alarming is that with the start of the dry season this situation is not expected to improve at least until the next rainy season, with intermittent water supply being the foreseeable reality for the next six months. Intermittent supply also poses serious threat to human health: when the network is not pressurized infiltration of wastewater can occur with consequent contamination of the water inside the pipe; this will happen irrespective of the treatment done to the water at Umbeluzi station that I don’t doubt is appropriate.

4. Our approach
To me this shows that prevention of cholera cases goes beyond washing your hands, despite this being an absolutely necessity. If a (local) government wants to avoid cholera outbreaks in the future, clear plans and goals are necessary. Government institutions – water providers, sanitation managers, ministries – have to meet and discuss a common and inter-organizational roadmap for urban health and well-being.This should be the starting point for policies, legislation and city-wide Masterplans, not the other way around.

2 thoughts on “Cholera outbreak in Maputo: the impact of insufficient sanitation services and limited access to drinking water”