by Adriano, Celma, Joaquim and Noor

Through NWO we got the possibility of attending the 4th International Climate Change Adaptation Conference (10-13 May 2016) in Rotterdam. The conference has the watchword “Adaptation Futures 2016: Practices and Solutions”. The venue with different features included plenaries, round tables, science session, practice session and science-practice session. The themes covered included cities and infrastructures; food, forestry and rural livelihoods; fresh water availability and access; public health; ecosystems based ecosystem based adaptation; disaster risk reduction and the artic. Cross-cutting issues covered topics such as, risk assessment, adaption planning and evolution; institutions and governance and; finance, investment and business. The opening speech was done by Melanie Schultz van Haegen, Minister of Infrastructure and Environment of the Netherlands; Robert-Jan Smits, Director for Research and Innovation, representative of the European Commission; and Ibrahim Thiaw, Deputy Executive Director of the United Nations Environment Programme.

The Minister of Infrastructure highlighted the need for action in order to adapt to climate change and gave examples of living labs such as the “floating school” in Makoko (Nigeria) as a way of climate change resilience practice, the invention of affordable technologies such as portable dialyses machine developed by Dean Kamen, as well as the use of local products to purify water as use of slingshot. Ibrahim Thiaw pointed out the need of transition approach from an awareness to strategic planning in adaptation to climate change.

Our project was represented by the four PhDs, Adriano, Celma, Joaquim and Noor, who attended alternatively during the three days, except the last day reserved for excursions. 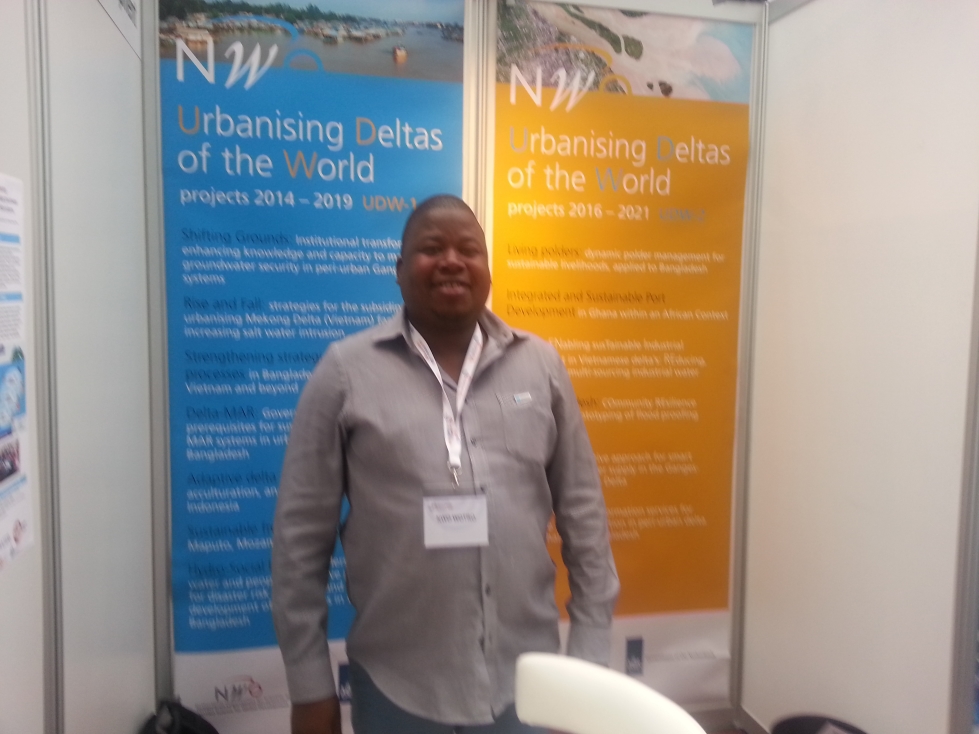 Adriano found interesting the science session on ‘institutions and governance’ about “Local governance of adaption in urbanising cities”. In this session were presented research findings covering North America, The Caribbean, Europe and Africa related to how institutional arrangements in local governance and urban planning are capable of reducing risk and build adaptive capacity risk management regimes. It was of particular interest to learn from the ‘Urban African Risk Knowledge’ research group that risk production in urban centres is highly complex and, a large part of the urban disaster risk challenges rest rely on governance.

Celma had opportunity to participate in two sessions, the science session and science and practice session. The science session was about “Freshwater availability under drought conditions as a potential driver for water conflicts” in which the main message was evolution in research in climate change and water security from impacts to adaptation as well from now the need of integration with multiple stressors nexus approach. The science practice session covered the “Liquid asset and adaptation future” in which the key message was the to understand wetland as a natural capital that the need to involve a multi-stakeholder process in which all need to be involved in development of business cases that connects restoration projects to the market.

Joaquim attended the session about “City resilience strategies – to support safe, inclusive and smart development”. The motivation to attend this session was due to the fact that Maputo has been witnessing a rapid development what include new infrastructures at the same time that face the challenges of climate change (floods, salinization of freshwater, erosion along the coastal line, etc.) and poor sanitation, demanding resilience plans, risk reduction, and development of strategies. The second session also quite interesting was “Implementing climate resilient water management projects to increase adaptive capacities, food security & avoid conflict over resources: examples from Thailand, India, the Netherlands and Spain.” It was an opportunity to interact with researchers from different countries, realities and background on water management, and have discussion about sustainable agriculture techniques, irrigation practices, farmer and consumers’ knowledge, and perceptions. He also liked the approach on cultural matters in India and how different projects in place are dealing with it the communities to meet their goals.

Noor attended a very interesting key plenary presented by Her Majesty Queen Maxima of the Netherlands, an active global voice on the importance of inclusive finance for achieving development and economic goals. The message was that climate change will hit the poorest the hardest, so adaptation is ultimately linked to poverty alleviation. Poor communities are in the surviving mode and lack money to invest in measures that will benefit them in the future. Financing and bankability were key issues at the conference, as addressed by Queen Maxima. On the inspiring speech of the Queen on universal access to financial services, she urged for opening up financial services to the poor. Insurances and loans are crucial for a quick recovery after a disaster, she said. There is a big potential for these service if the telecommunication sector can make them available via mobile phones. In countries such as Kenya, Tanzania and Uganda an app has shown how easy it can be for poor people to get access to solar energy. Another session attended was “tools and approaches to assess disaster reduction strategies” where among others tools such as the emerging tools for loss and damage decision making and adapting social systems with cases of developed and developing counties showed the increased awareness of developing rapid responses to disasters. 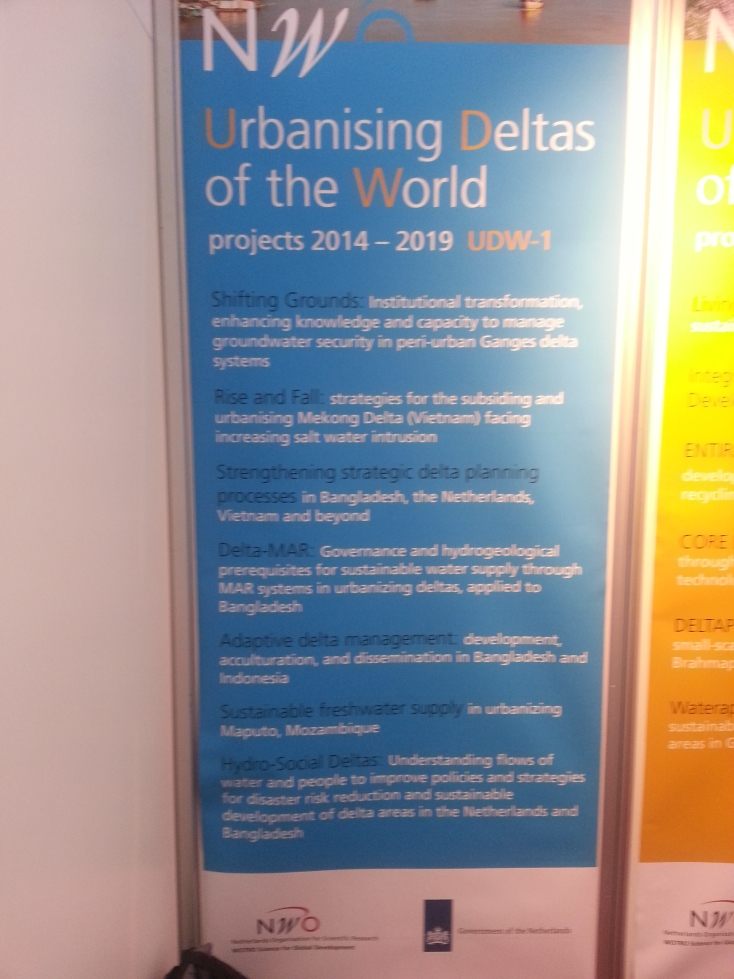 All “Urbanising Deltas of the World” projects were represented.

During the three days, the four PhD fellows were also exhibitors attendants at “Adaptation Expo” that was hosted at the World Trade Centre. In behalf of NOW-WOTRO they have opportunity of showcase and share with the conference participants the relevance, objectives and progress of the UDW project that are part.

Finally we would like to thank the people at NWO for giving us the opportunity to attend the conference.