Great news! We are involved in a new project in Mozambique and that’s always very exciting! In the past few months we have been quite busy setting-up a NUFFIC-funded capacity building project in the Zambezi Valley. The project is entitled Zamadzi and is shared with several Mozambican and Dutch partners and aims at developing the capacity of local stakeholders in Integrated Water Resources Management.

What’s the situation in the Zambezi Valley?
The Zambezi Valley is an area in the center-North of Mozambique of strategic importance both for Mozambique and for its neighboring countries. To give you a sense of its sheer size, the valley extends for more than 230,000 km2, which would make of the region the 13th largest European country in area, but is home to about 15 million people. The valley is considered one of the most fertile farming areas in the world and hosts extensive natural resources. One of the rivers in the region, the Zambezi is the fourth biggest in Africa, and flows through a number of national parks and is important for the fishing industry and for energy generation, with hydroelectric power stations along the river supplying electricity to 40 million households. However, the interests of the various national and international stakeholders who share the river vary widely, and the lack of a common vision for this valuable shared resource leads to enormous problems in the areas of safe drinking water, food security, energy production and water management. To address these challenges, a paradigm shift is needed in the Valley, there’s a need to abandon the current technology-oriented perspective of water management, in which everyone acts independently, to an integrated approach where all stakeholders work together to develop efficient, just and sustainable solutions for the region. However, to achieve this, local stakeholders at various levels, urgently need more knowledge in Integrated Water Resources Management (IWRM). 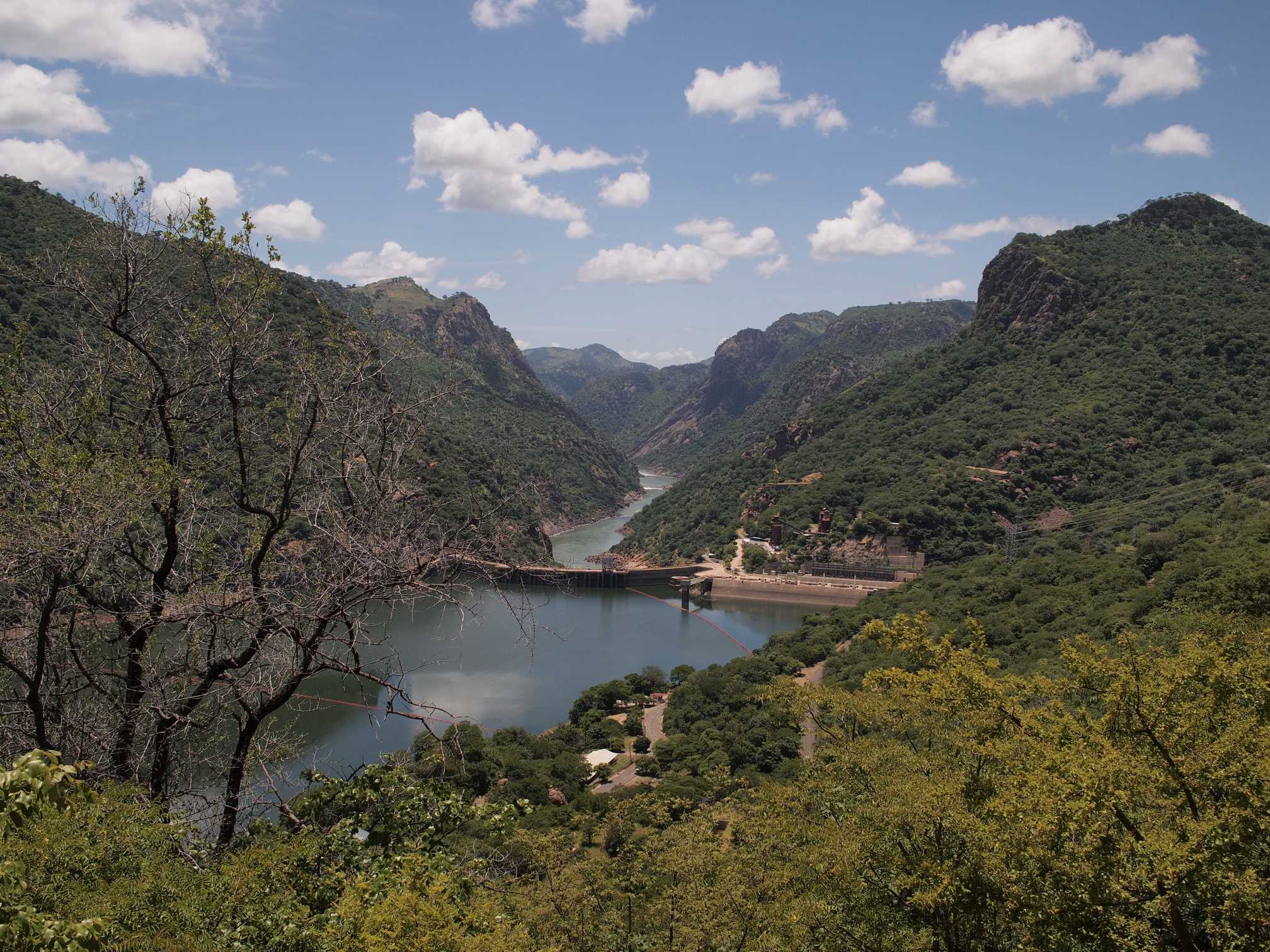 During the inception workshop we also had the opportunity of visiting Cahora Bassa dam in Songo.

Ok, then what’s Integrated Water Resources Management?
IWRM is a broad field and encompasses many different disciplines, including water and sanitation services, water quality monitoring, hydrological data collection and interpretation, water governance and diplomacy and irrigation. The basic IWRM principles as stated by the UN Global Water Partnership are:

Whereas the basic IWRM principles may be commonly applicable, independent of context and stage of economic and social development, there is no universal blueprint as how to put such principles into practice. The nature, character and intensity of water problems, human resources, institutional capacities, the relative strengths and characteristics of the public and private sector, the cultural setting, natural conditions and many other factors differ greatly between countries and regions. Practical implementation of approaches derived from common principles must reflect such variations in local conditions and thus will necessarily take a variety of forms. 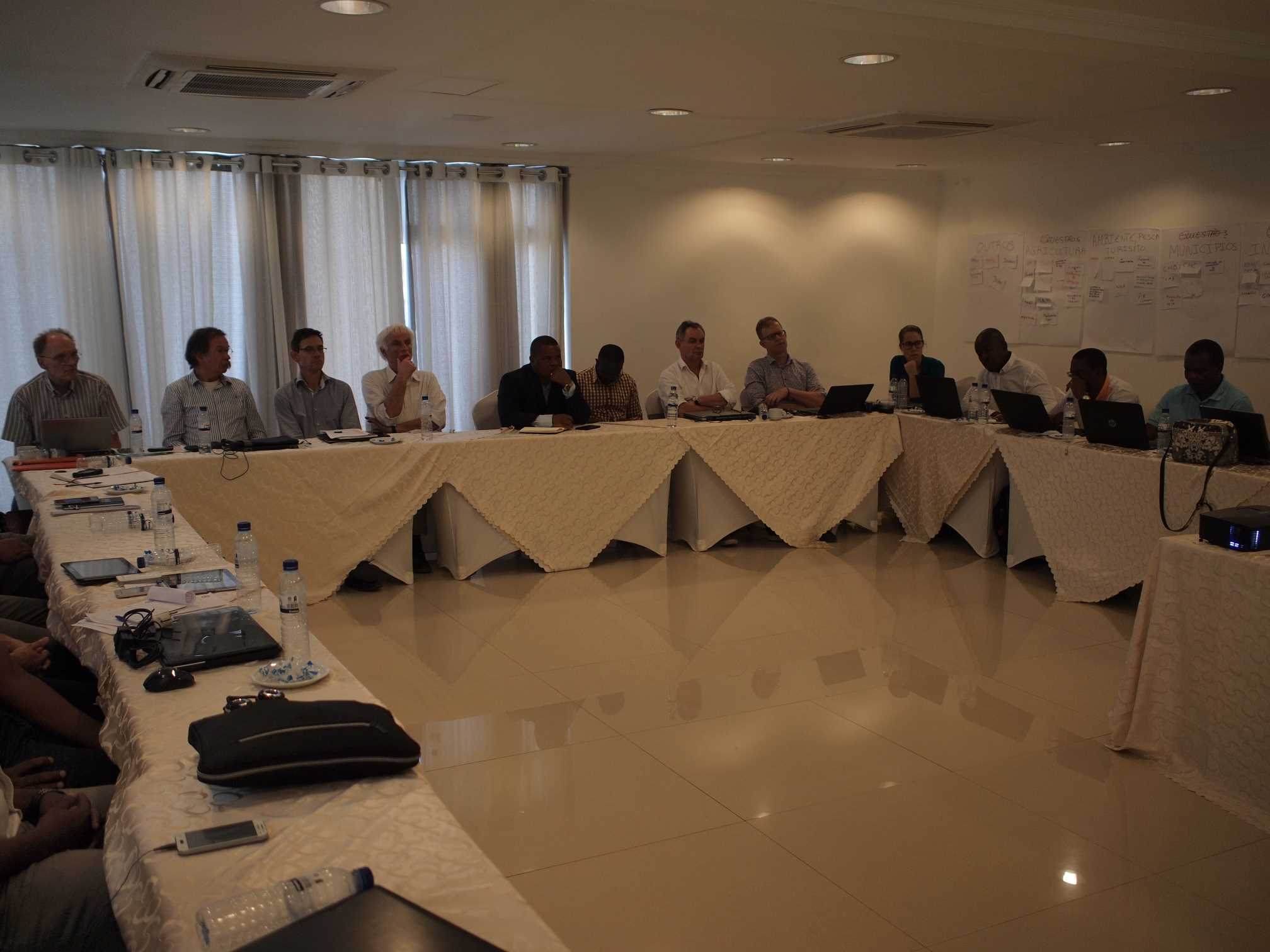 The inception workshop in Tete.

Furthermore, in ongoing IWRM projects all over the world, it is recognized that women play a key role in the collection and safeguarding of water for domestic – and in many cases – agricultural use, but they have a much less influential role than men in management, problem analysis and in the decision-making process related to water resources. This means that the consortium will seriously take the need to ensure that the water sector as a whole is gender aware and that this process should start by the implementation of training and extension programs for IWRM professionals.

Ah, and with whom are you working with?
The project consortium consists of four Dutch Universities (KIT Royal Tropical Institute, IHE Delft Institute for Water Education, Wageningen University & Research and TU Delft), seven Mozambican Universities (ISPM, ISPS, UCM; and FENG, FEAF, FEARN and FCT of UniZambeze), and is led by Agência do Vale do Zambeze – Agência de Desenvolvimento do Vale do Zambeze. Finally, Zamadzi is funded by NUFFIC, under the Netherlands-funded development cooperation programme NICHE. It’s important to mention the instrumental support that ADZ has given us in the past few months. 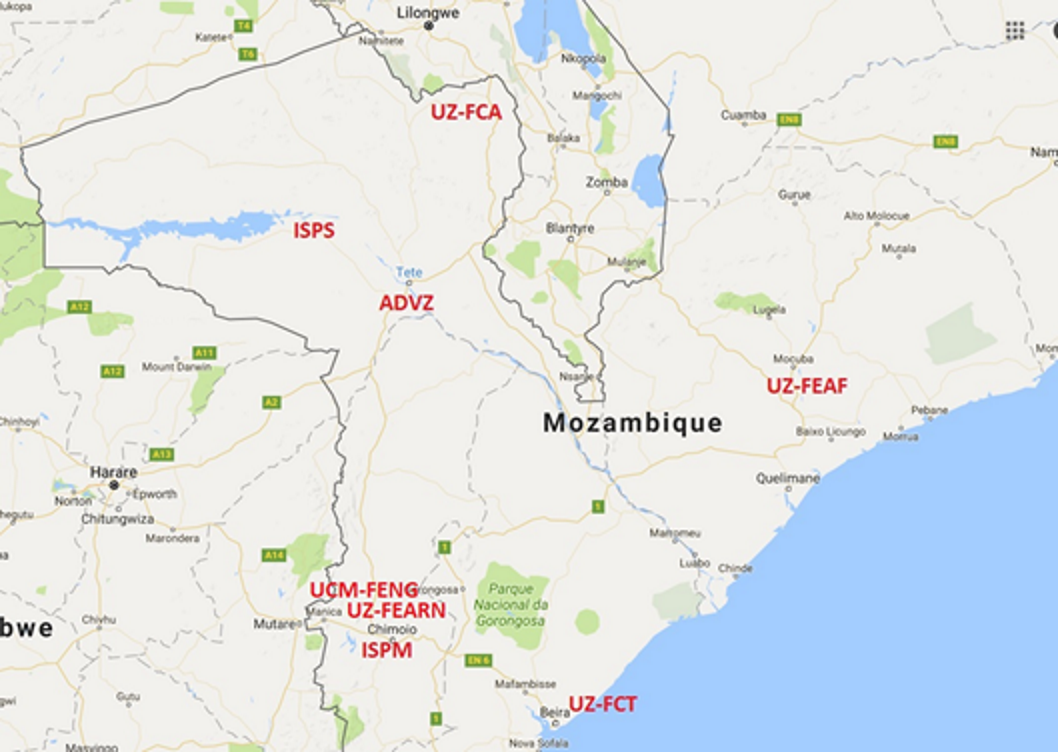 Location of all the Mozambican requesting organizations (ROs) within the Zambeze Valley.

And what’s the existing capacity on IWRM?
In terms of education and training the Mozambican partners, particularly in the region, are in need of skilled and knowledgeable human resources, both at technical and management level, that understand and can apply a paradigm shift and the underlying principles of IWRM. More specifically the following shortcomings need to be addressed:

And what are you aiming at with this project?
The overall aim of the project is to contribute to the sustainable development of the Zambezi Valley by:

What have you been going to achieve this?
In the past few months we have been quite engaged in this project and have traveled to the region already in three occasions.

First workshop
We had an inception workshop in Tete at the end of February 2017. This workshop brought together all Dutch and Mozambican partners together for the first time and the Mozambican requesting organizations (ROs) were invited to present their curricula and their institutional needs. This meeting was also the opportunity to prepare our first stakeholder workshop – the Future Search Conference. 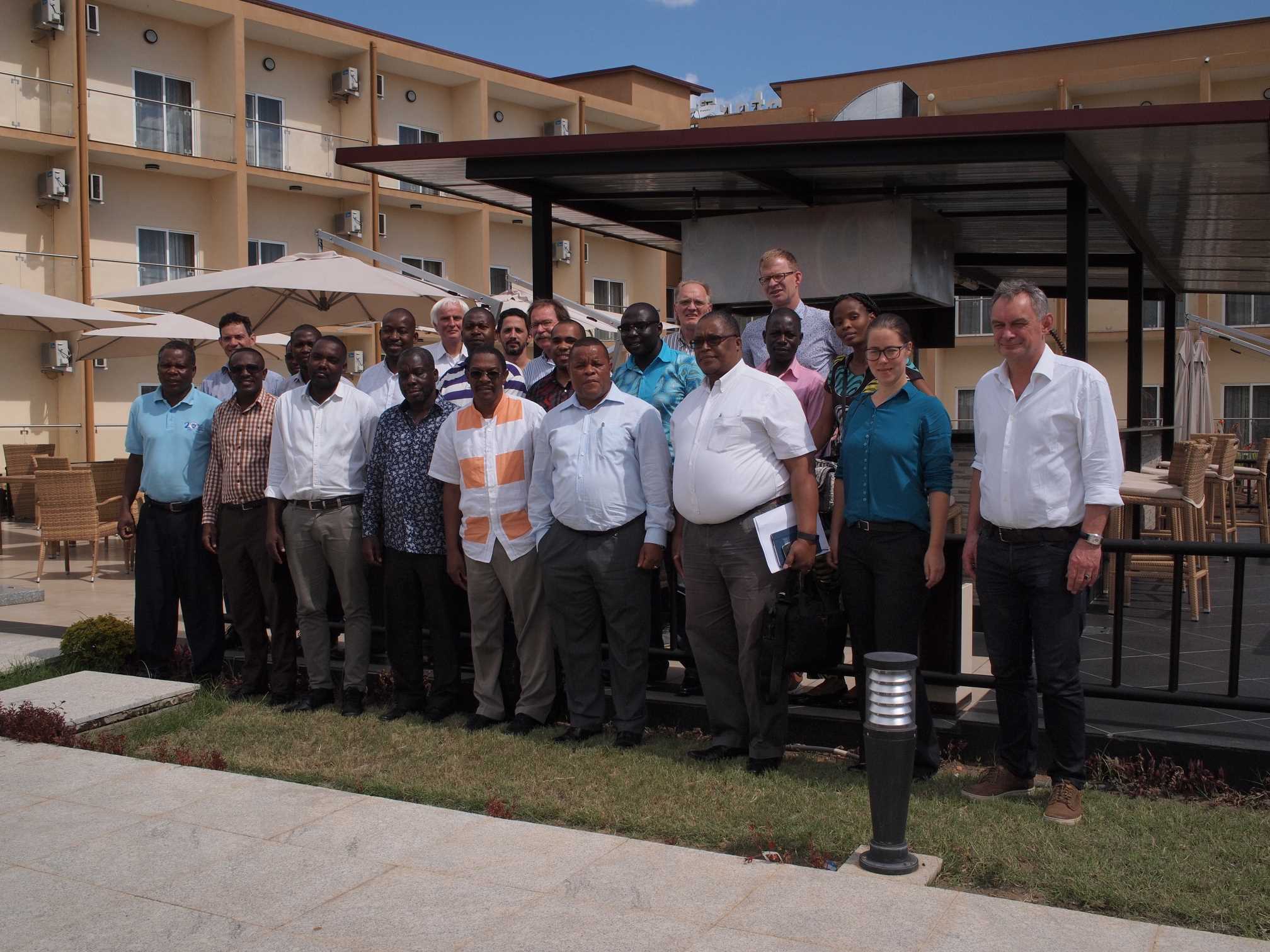 Family photo during the inception workshop.

Future Search conference
Afterwards, in late May we organized a three‐day Future Search conference in Tete in May 2017. This participatory meeting brought together more than 70 representatives of stakeholders, including national and regional government, municipalities, industry and mining, agriculture, NGOs, Universities and WaSH experts. The participants interacted to discover shared understanding of their past, develop a common picture of current trends and developments, and finally create ideal future scenarios. 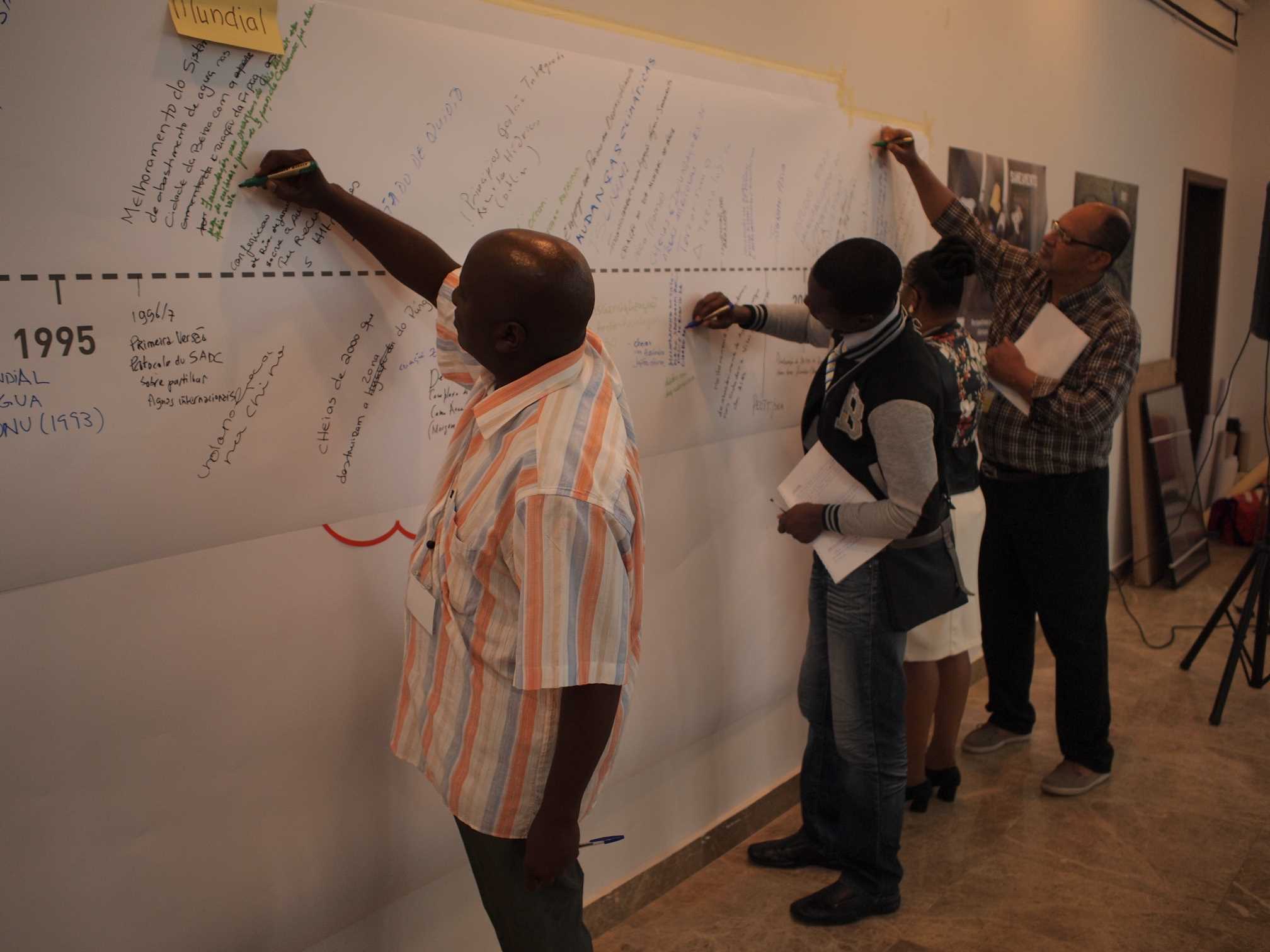 The Future Search conference had two objectives. The first was to develop a shared plan for IWRM for the Valley. This forthcoming document will propose a shared vision on how to sustainably manage the water resources in the region. The second objective, was to identify the needs for capacity building of stakeholders and of the local Universities to provide educational content in IWRM at different levels, including higher and vocational education. The approach followed is a paradigm change whereby local stakeholders find a solution during the process instead of this being presented to them by external experts. 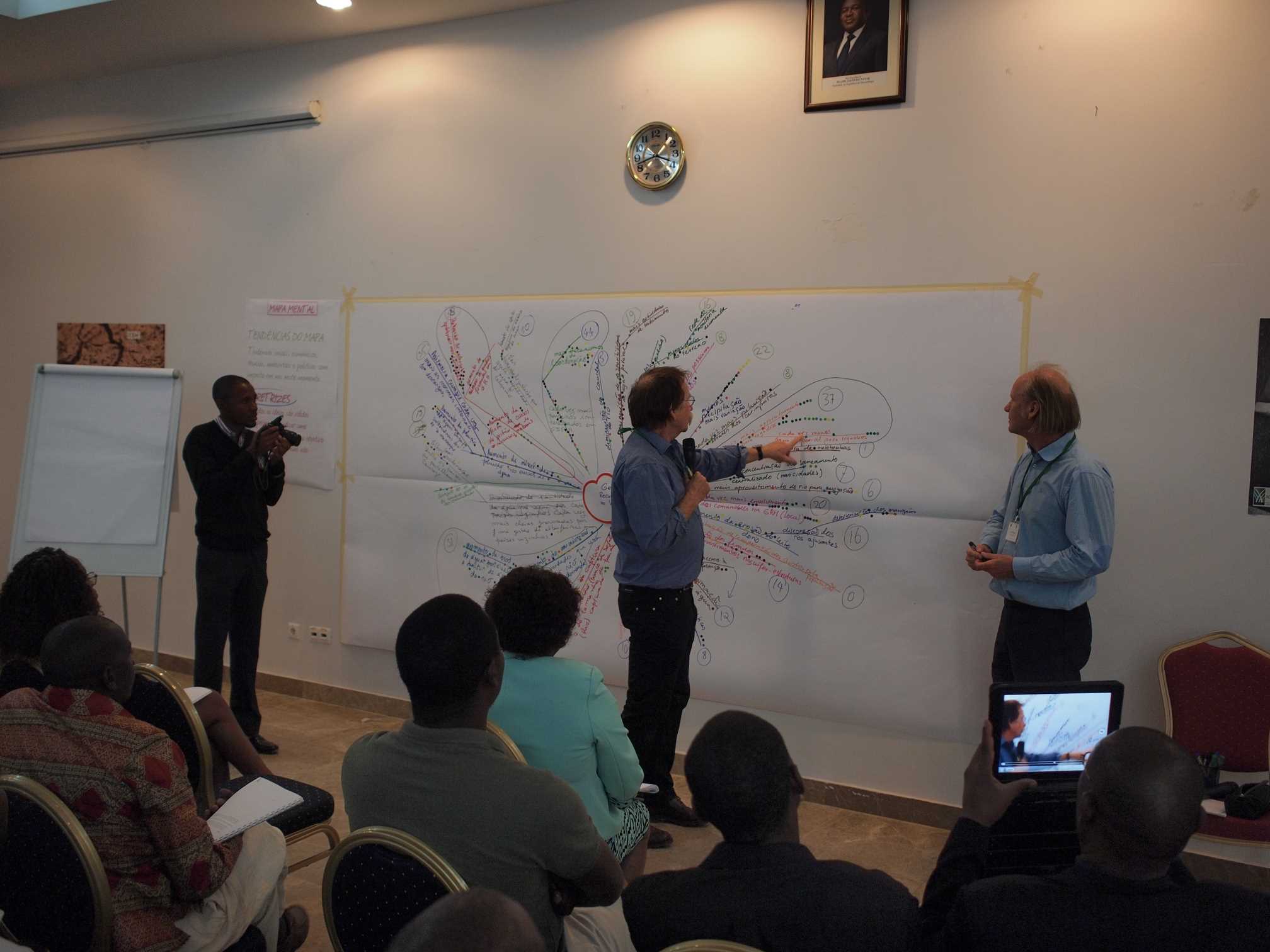 During the Future Search Conference we also worked out a mindmap for the Zambezi Valley.

Road trip
Then, based on the findings from the Future Search conference, at the beginning of July 2017 me and Tanja de Boer visited five of the seven ROs. The trip, that took us to the Provinces of Zambézia, Manica and Sofala along almost 2,000 km of Mozambican roads, started with a visit to FEAF in Mocuba. We then travelled to Chimoio to meet the people of FEARN and FENG, both of UniZambeze; and ISPM. Finally we went to Beira where we met FCT, also of UniZambeze. We did not visit FCA (Angónia) and ISPS (Songo) but a visit to these ROs will be planned in the coming months.

The main objectives of this trip, were identifying potential MSc candidates to follow the Hydraulics and Water Resources Management MSc at UEM, assess the facilities of the aforementioned five ROs and share some of the findings of the Future Search conference. The trip was a huge success and we identified ten potential candidates and registered much interest on the PhD program and we are expecting many applications. 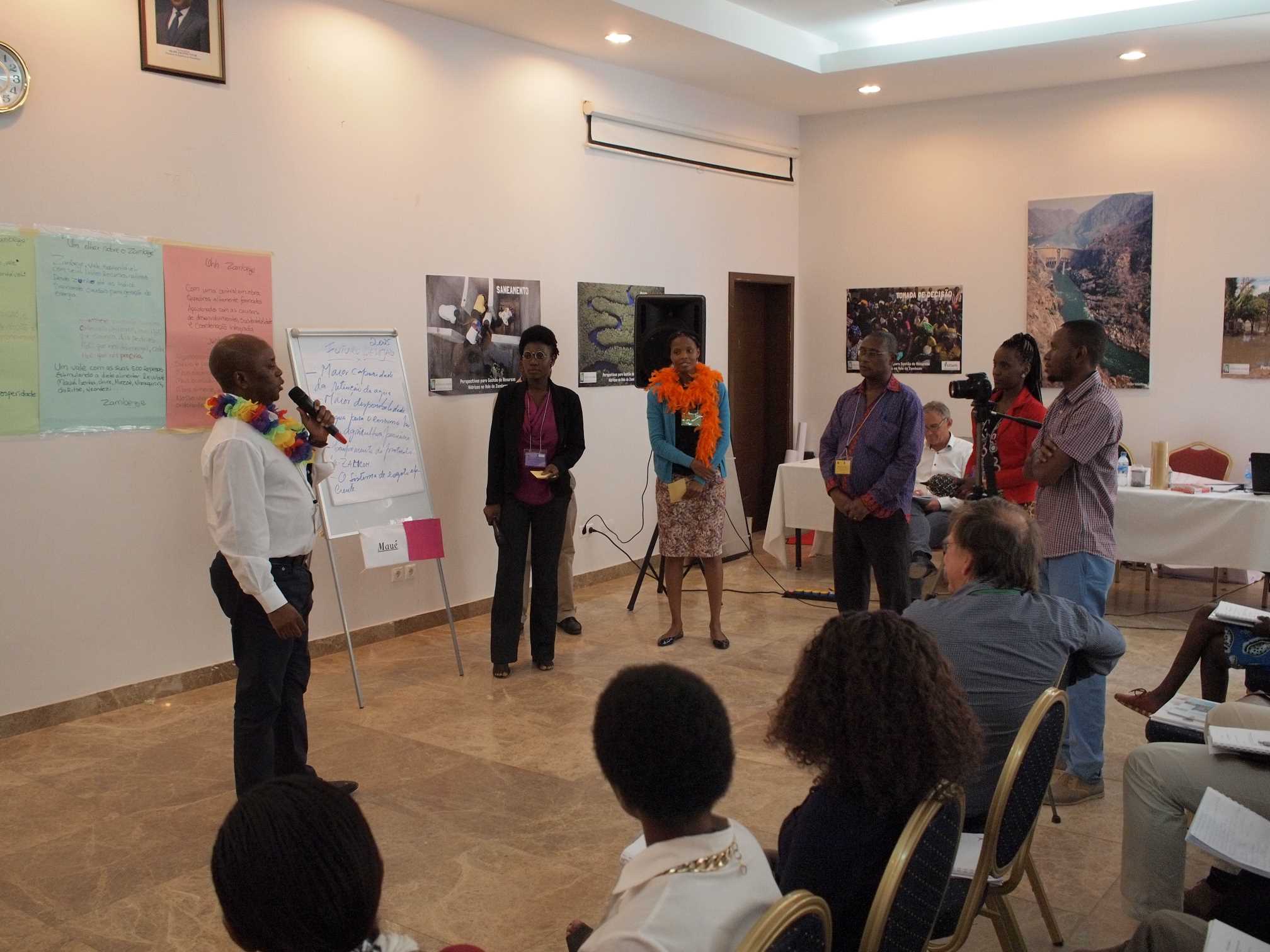 By the way, why Zamadzi – what does it mean?
On the last day of the Future Search conference the participants were asked to vote for a new project’s name, as NICHE/MOZ/266 sounded quite dull. A few of the proposed options were ZAMADZI, iGazela and Capacidágua, with ZAMADZI being the most voted option. ZAMADZI consists in the merge of two words, the fragment ZAM from Zambezi, and the word MADZI which means water, with a few variations, in several Banthu languages: whereas in Zulu (South Africa) water is translated as manzi, in Swahili (Tanzania, Kenya, Uganda, Rwanda, Burundi, Mozambique and RDC) is maji, with mati meaning water in Shangaan (Southern Mozambique, Swaziland and North-East South Africa). 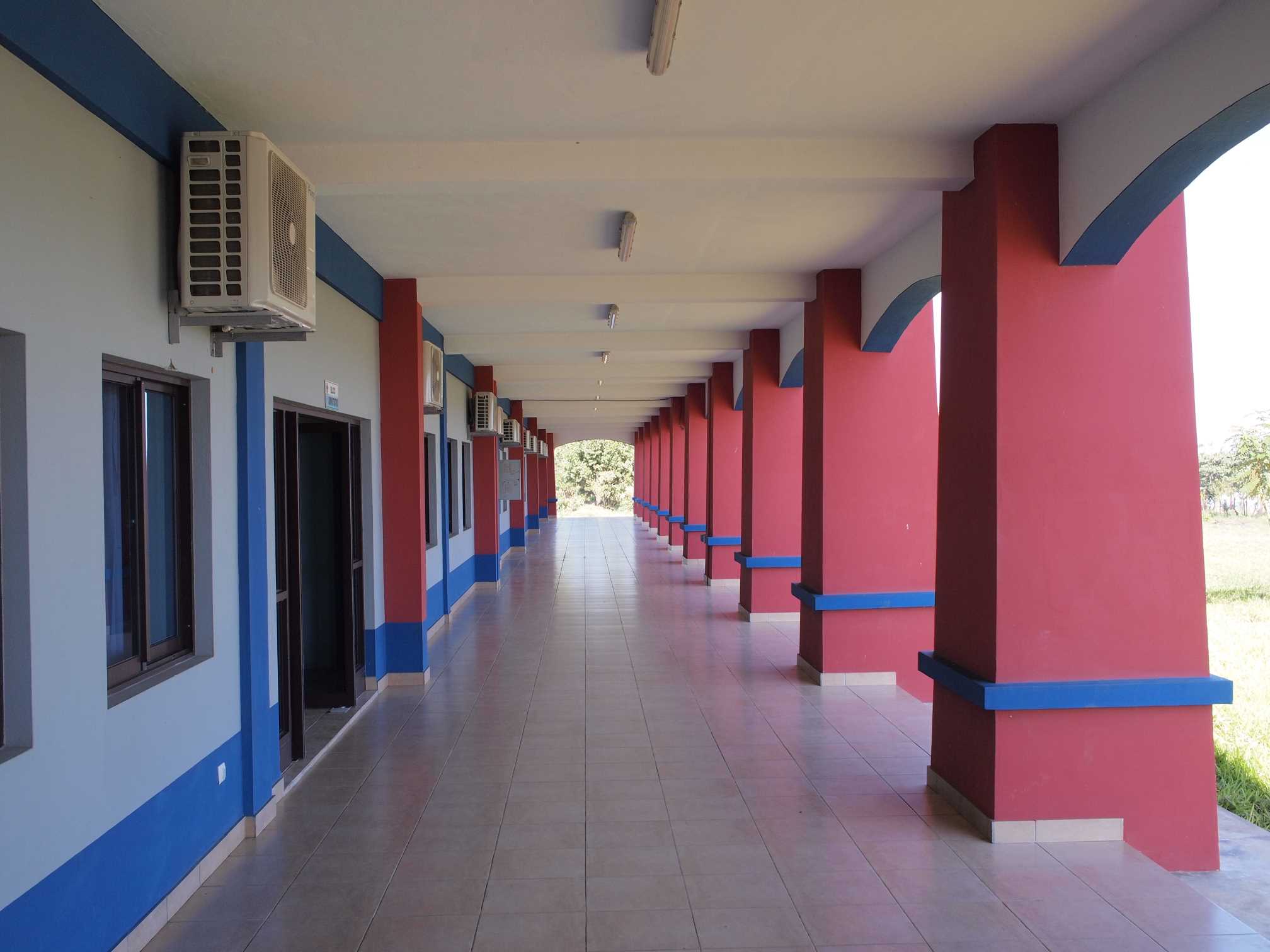 We could not be happier with the new name as it perfectly encapsules the concept of the project: just like this family of languages that is spoken in this corner of Africa, the water of the Zambezi, the fourth largest in Africa, is shared among millions of households across large extensions of the continent, and just like language the river brings the people together and enables daily life. However, sharing the Zambezi is complex and the river must be exploited in a sustainable way, with national and international agreements having to be fully respected. We firmly believe that can only be done if the local populations, the local governments and the private sector have capacity to adequately manage their water resources – which is exactly what the Zamadzi project aims at doing.

Nice! What will you be doing next?
Future activities will include the enrollment of ROs’ staff in the forthcoming Hydraulics and Water Resources Management MSc program that is being organized at UEM (September 2017); the identification of potential PhD candidates within the Mozambican Universities (second half of 2017) that are expected to start at the beginning of 2018. Both MSc thesis and PhD thesis will focus on challenges that the Valley faces, following the concept of action research. Finally, we are also planning the realization of two short-courses for the ROs (second half of 2017). Also in our minds are visits to ISPS in Songo and FCA in Angónia (second half of 2017) – we’re looking forward to hitting the road again! 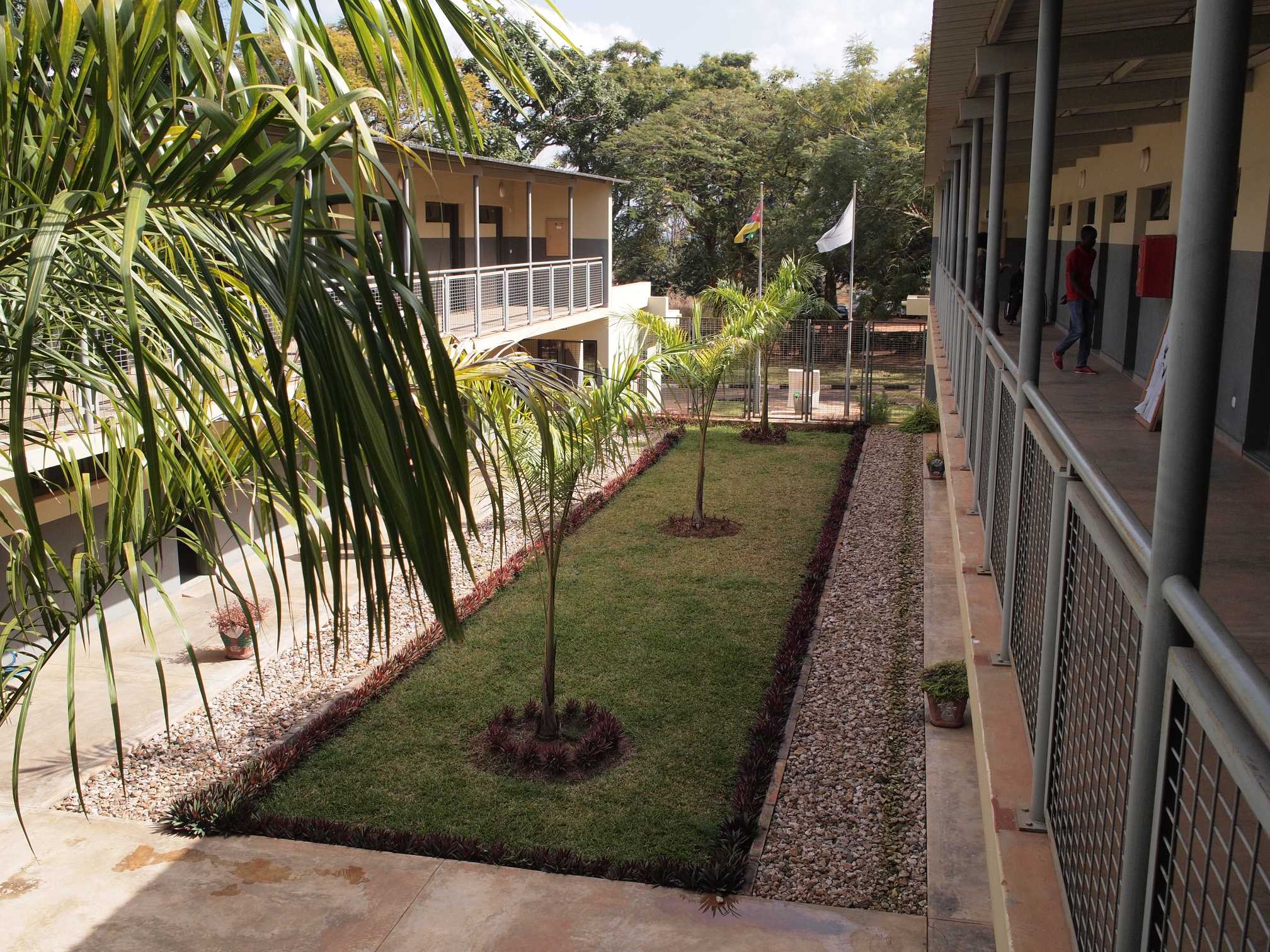