It has been two weeks since I arrived in Maputo, the capital of Mozambique. After being picked up by Delio Zandamela, the very friendly international mobilization staff, I arrived in Residence 1 of Universidade Eduardo Mondlane (UEM), my dormitory for the next 2 months. Breathing the warm air after a long journey, I slowly absorbed my daily life experiences here; the country, the city, the people, and the project itself.

Talking about the project, I am coming here for my final thesis research to study the possibility of using treated wastewater reuse for concrete production. The topic is in line with the rapid growth of infrastructures in urbanizing Maputo. My goal is to identify the estimated amount of water consumption from construction companies and concrete suppliers; including their water resource locations and water quality for mixing, curing and cleaning the clinkers. This inventory will be completed through database mapping and semi-structured interviews. The distribution of the companies and their water resource locations will be the foundation of placing the pilot plant of wastewater treatment scheme. This is a part of the PhD research from my daily supervisor, Noor Jehan Gulamussen, who involves in this project to identify the possibility of treated wastewater reuse for all types of industries. Now let me take you to explore my first sights in Maputo. 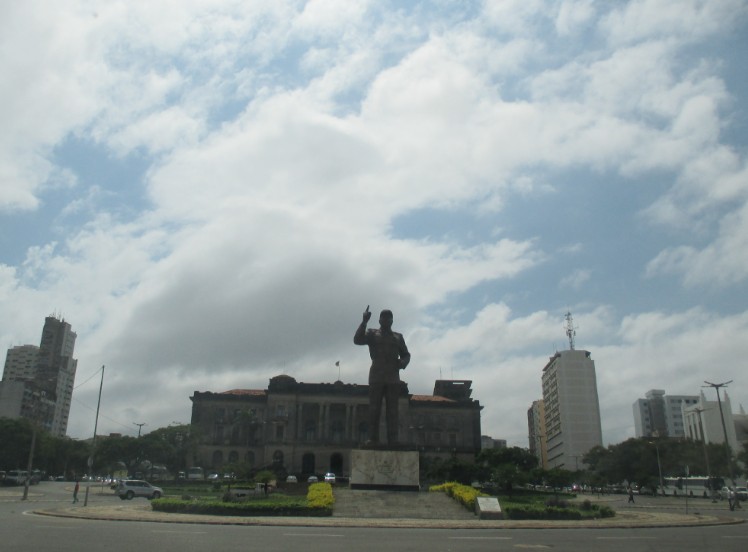 1. Between Traditions and Visions

I am amazed to find that some conditions are quite similar to Indonesia, my home country. The weather is one of them. While Indonesia is mostly tropical, Mozambique has a climate variety along its area. Located a bit in south from the equator, Mozambique has a gradation of tropical to semi-arid subtropical climate from the north to the south. The rainy season usually comes from November until March with average precipitation of 1,032mm/year. Large variations between the north and the south affects Maputo to have a mixture of dry weather but sometimes face huge rainfall periods. Noor explained that the city had suffered from a longer-than-usual drought, but the time when I arrived, the rain poured for many times in these two weeks!

Perhaps due to the resemblance of the climate, I found that the varieties of food are also similar to Indonesian dishes. We eat a lot of rice and cassava (even we eat the boiled leaves, but the Mozambicans blend it with other ingredients and called it matapa), cook meat, poultry or fish with coconut milk and a lot of spices, and make dried fruit or vegetables to be dipped in sour and spicy sauce (we even have similar name for this: acar). You might be curious how I know these typical dishes; it is because Noor cooked for me once for lunch and also invited me to her family’s occasions. I found that all the food is breathtakingly delicious and tastes like home! 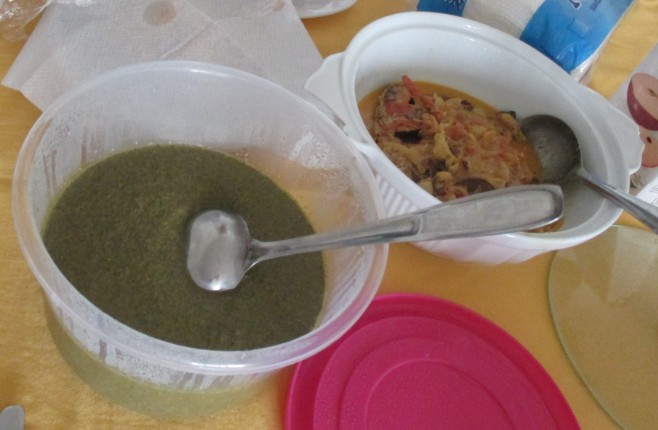 Just like the food, the people here are very friendly. They like gathering around and having lively conversations. Noor’s cousin, Sintia, invited me for a monthly family lunch meeting last weekend. The family (or friends) collect some money per month and give it to one of the members in turn. The one who has the turn to take money conducts lunch or dinner at home. This is exactly similar to what Indonesians do. Mozambicans call it xitike and Indonesians know it as arisan. 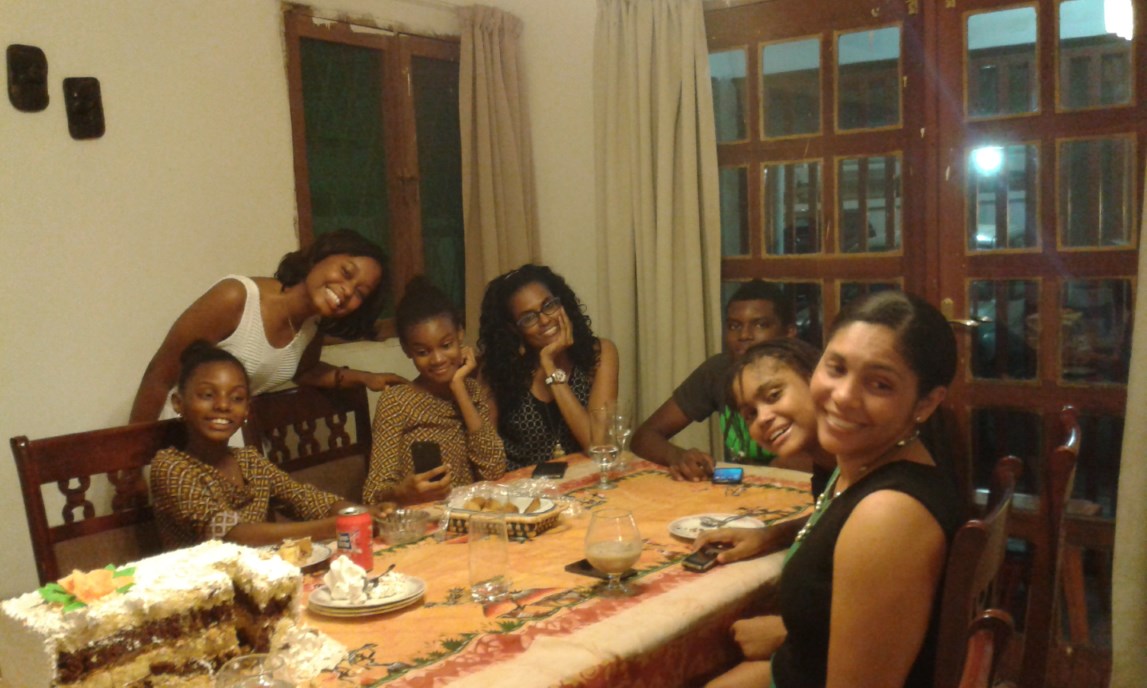 Noor’s Family: Such a Wonderful Moment to be with them!

And, how about the students here? They are very energetic and lively. Everytime I had conversations with the students in my dormitory, at campus, or from some student organizations here, I could see that they love and are proud of their country. According to their stories, the country lacks a crucial number of engineers despite the increasing growth of infrastructures. That is why if one studies engineering here, he/she will get a job very quickly. Thus, the students aim to be part of national improvement towards better future. They often said, “We want to pass on a better environment to our next generations.” I am impressed by their vision!

2. Between Yes and No

In the first week I was introduced to Nalda Damião, the civil engineering student who will study the wastewater treatment plant, and Antonio Manuel, the chemistry student who will focus on laboratory experiments. I am sure we will make a good team! Then, we focused on listing all construction companies in Maputo city and province. It was very interesting as in a detective game; searching from the internet, data from the National Directory of Industries, water consumption list for industries from drinking water company, yellow pages book, KPMG tax and advisory list, asking people and investigating the addresses. At last, we could list 145 construction companies and reach 105 of them which have contactable phone number or address.

Unfortunately, during our “stalking process”, some address and phone numbers are invalid. Some findings ended up with bad stories; bankruptcy, death of the owners or family problems. Some contacts even belong to other entities; schools, geophysics consultant and even a housewife! So far, we were glad to see that 34 companies agreed to discuss about our interview request, then we sent them the official letters by email.

Things got more challenging when some companies did not reply our email for having an interview schedule. The second calling session was made, only to find out that they did not want to cooperate, with various reasons. The “yes” became “no” very quickly. However, we could perform 9 interviews until today. The results vary highly. Some companies have their individual water recycling system but some others do not even calculate the volume of their water consumption. However, almost all companies declared that they are willing to participate for the next stage of the project: the pilot plant. Muito legal! 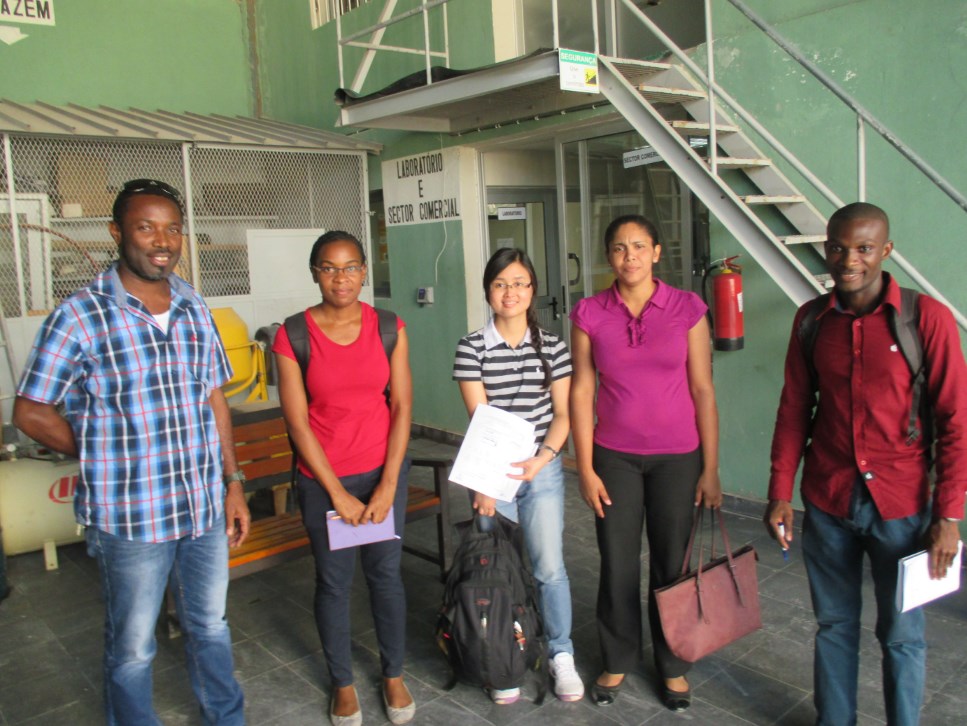 After the Interview with Britanor, one of the largest ready-mix concrete suppliers. Left to right: José Massango (Britanor), Nalda, me, Noor, António.

2. Between the Giant and the Petite

When I started searching for companies, I tried to look for only the big ones because they obviously use a lot of water for producing concrete (for mixing, curing and cleaning trucks and clinkers). However, when I found that the number of small companies is extremely higher than the big ones (more than 150 small enterprises in 1 location), perhaps their existence is also essential. Thus, how to choose between the “giant” and the “petite”? Is it true that “the sum of the parts are more than the whole”? If you have any thoughts, please feel free to leave comments below. 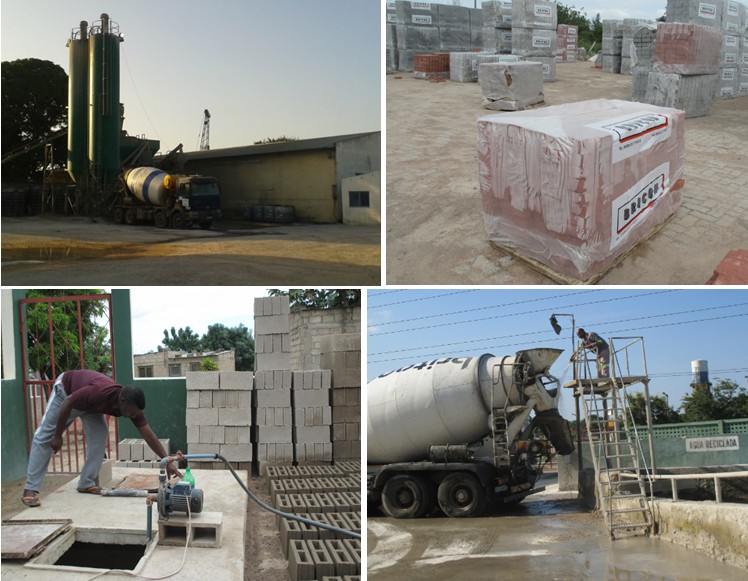 Some big and and some small companies.

In the end, between all the warm days and windy nights, between the new “hello” and “see-you-again”, and between the similarities and the differences, I found a little piece of home and a heart-warming welcome from Maputo. Please bear with me for the next two months, haha. Muito obrigada! Até logo!

1 thought on “Maputo in the first two weeks: between two sides of the sights”