Natalia is taking this opportunity to tell us a bit more about the research proposal she will defend next September.

Infulene Valley, on the border between the city of Maputo and Matola, has historically played a key role as a fresh food provider for both cities. In Maputo’s green belt, smallholder horticultural production (SHP), as in the rest of Mozambique, is carried out by small groups of people, usually related by family ties, mainly for their own consumption, and increasingly headed by women (Uaiene 2014). FAO (2012) estimated there were approximately 13.000 smallholder farmers growing vegetables on 2.300 hectares in the Infulene and adjacent Mahotas Valley. The average size of the smallholder plot, called machamba, is 0,3 ha and a variety of vegetables, including cabbages, lettuce, tomatoes, onions, eggplants, beans and pumpkins is produced (FAO 2012). However, Infulene is currently going through a series of socio-environmental changes. 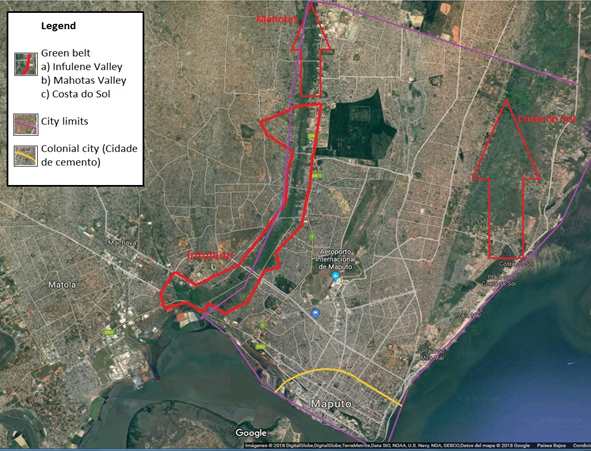 Producers irrigate their plots from a variety of water sources, with the choice of water depending on the location and proximity to the different water sources, they are: the tributary of the Influene River, called Malausa Ditch by the users; natural springs harvested in shallow wells and conducted through ditches; untreated domestic and industrial wastewater discharges; and drinking water from the piped network. An alternative source of water for irrigation is the effluent of Infulene’s the Wastewater Treatment Plant (WWTP), which receives 3% of the city’s domestic effluents (5,000 m3/day) and fecal sludge transported in trucks from the slums (500 m3/day). Whereas rest of the wastewater produced in the city is discharged directly into Maputo Bay (Spaliviero 2008), the remaining fecal sludge is often left in the domestic environment. Access to different sources of water for irrigation is related to where one’s machamba is in relation to different sources.

All of these sources are eventually discharged, through overflow from ditches, or percolation through the soil, to Infulene River. The quality of the surface water flowing through in the catchment is changing. The WWTP was built in the lowest part south of the valley and started operation in 1990 (DHV 1984) and since 2011, some housing complexes have been allocated north of Infulene (Zimpeto – Vila Olímpica) and some industries discharge their wastewater into the river. The impact of these changes on SHP strategies – what is produced, with what water or production inputs, with whose labour – and on the subsequent value of smallholder production is relatively undocumented. There is also a lack of documentation and monitoring of the quality of the water, however, district authorities discourage using Infulene River’s water for irrigation. Consequently, the idea that the produce of Infulene is “dirty” or unsafe is well established in Maputo’s middle class, which adds more difficulties to its commercialization.

Research from the NGO Observatório do Meio Rural (OMR) and international development organizations, like FAO and the World Bank, affirms the importance of family farming for the country’s food security and national economy, but problematizes family agriculture and peri-urban horticulture by documenting a decline in productivity per area unit (Uaiene 2014). This research documenting the ‘decline’ in productivity and decline in water quality is used to inform policy and legitimize development interventions. This will have a particular impact on the machambas, as foreseen in the World Bank’s investment plan for the expansion of WWTP which estimates the displacement of several hundred smallholder farmers from the zone (World Bank 2017).

However, the continued existence of SHP in Infulene Valley indicates that there is a value to this activity for the farmers and raises questions of how to understand the labour that goes into production, how labour is organized, for whose benefit. There is not enough information available about how they experience the socio-environmental changes happening in Infulene themselves. How these social relationships of production are structured according to a particular value/meaning of the machamba can explain how water, of what quality is used, or not – and therefore might affected by changes in water’s quality or quantity. Water is socially produced and is embedded in gendered power relations in a particular way. That is why changing its materiality might have an impact in social organization and practices of production. Understanding the value/meaning of the machamba as a socio-spatial unit where social relations of production and reproduction take place; and developing the language and terminology to articulate its value for exploring the processes and impacts of changes in water quality caused by land use transformation of the Valley represents the central goal of my PhD research project.

I take Infulene as a case of SHP, which is gendered and watered in a particular way according to the intrinsic value for the people who work on it. Specifically, I aim to understand how particular values/meanings of production are reflected in the organization of labour in horticulture, what this means for practices of irrigation in terms of sources, quantity and quality of water. Equally, I aim to identify how changes in quality and quantity of water will change these social relations of production. Being attendant to uneven relations of power shaping agrarian labour, and what this means for the interventions on water quality, particularly of the WWTP.