These were my first thoughts when I received the email from Sustainability a few weeks back saying:

We are pleased to inform you that your article “Mitigation Potential of Sanitation Infrastructure on Groundwater Contamination by Nitrate in Maputo” has been published in Sustainability and is available online.

Preamble
This means that you can grab your copy here: we opted for publishing on an open-access journal to allow maximum impact, let’s be honest: the article, and all the research we do in this project, focuses on Mozambique and on other countries in the Global South, so it does not make much sense to publish our science behind a pay walls. Also, in this post I am not going to cover the results and conclusions presented in the article, we made it open source to allow people to download and read it so there’s no point in duplicating information. This was a long process from data collection and gathering, model development, data analysis and writing and editing and I prefer to take this chance to report on the process.

How did it all begin?
This all started a few years back when I first heard about the city-wide Masterplan, which has been a source for a number of articles in this blog (here, here and here, to name a few). The Masterplan is a very comprehensive document, very well made that covers sanitation (centralized and on-site) and urban drainage. However, as researchers, we have been very interested in it since the beginning: whereas Adriano is very interested in understanding why and how the Masterplan was produced, in particular, who commissioned it, who paid for it, what were the underlying assumptions, what will be done with; I have been more interested in understanding how will the Masterplan answer some of the most pressing challenges currently affecting Maputo regarding the access to safe drinking water and to inclusive and affordable sanitation services. In particular, one of the issues that I have been most interested in is groundwater contamination by Nitrate. However, I am not so interested in the (geo-)hydrological processes but more on the origins of the Nitrate and the links with urban sanitation, I am also very interested in understanding how this situation can be addressed with the construction of sanitation infrastructure, including sewer networks, non-leaking on-site sanitation systems and improved fecal-sludge services. Thus, my interest in the Masterplan.

What is the problem with groundwater contamination by nitrate?
For more information please check this WHO’s report, but consumption of drinking water contaminated by Nitrate has been linked to severe health problems, such as blue-baby syndrome, blood disorders, hypertension, and cancer with WHO defining a maximum limit of 50 mg/L for drinking water.

How serious is the issue in Maputo?
Simply put, it’s very serious. And to prove it I am presenting two different sources, the one on the left is a plot that I use very frequently that comes from the 2011 report made by Hydroconseil and WE Consult about groundwater sources in Maputo. In this plot, nitrate concentrations sometimes reach 250 mg/L, five times above WHO’s limit. The one on the right, more recent, was published in the MSc thesis of my colleague Guilherme Nogueira who did his field work here in Maputo in 2017. Guilherme found somewhat lower values, but still a few above WHO’s limit, especially in the peri-urban areas of Maputo where people mostly rely on on-site sanitation. 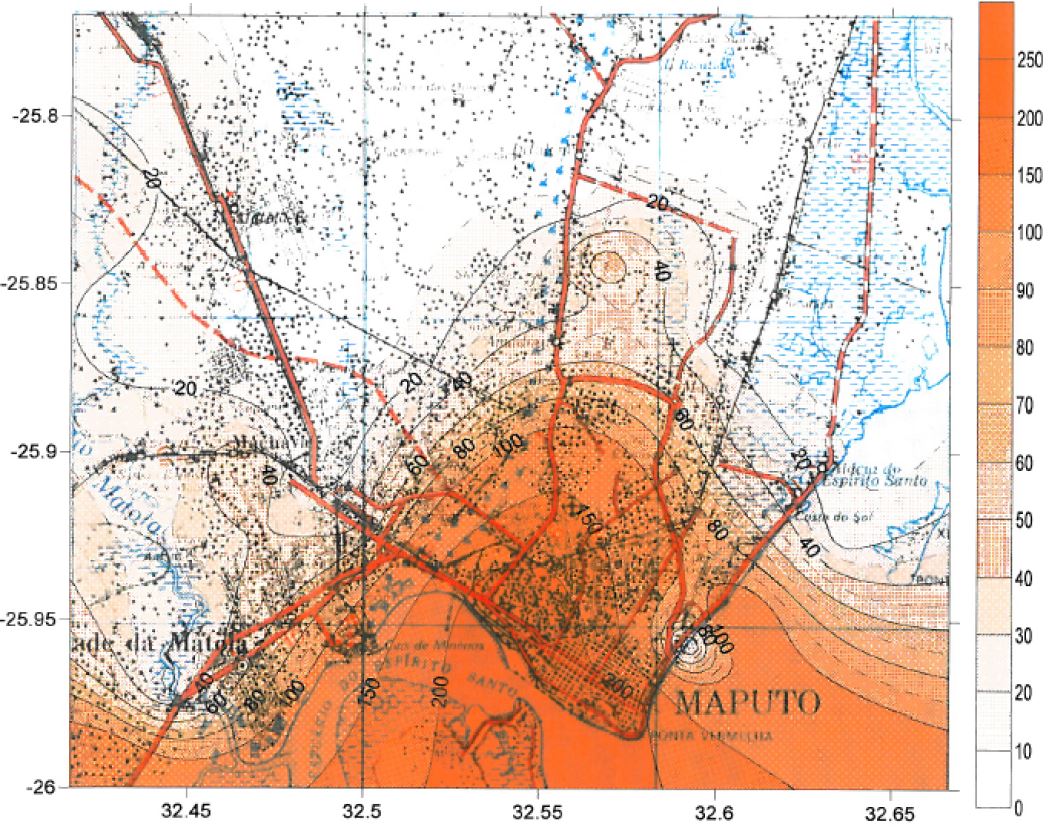 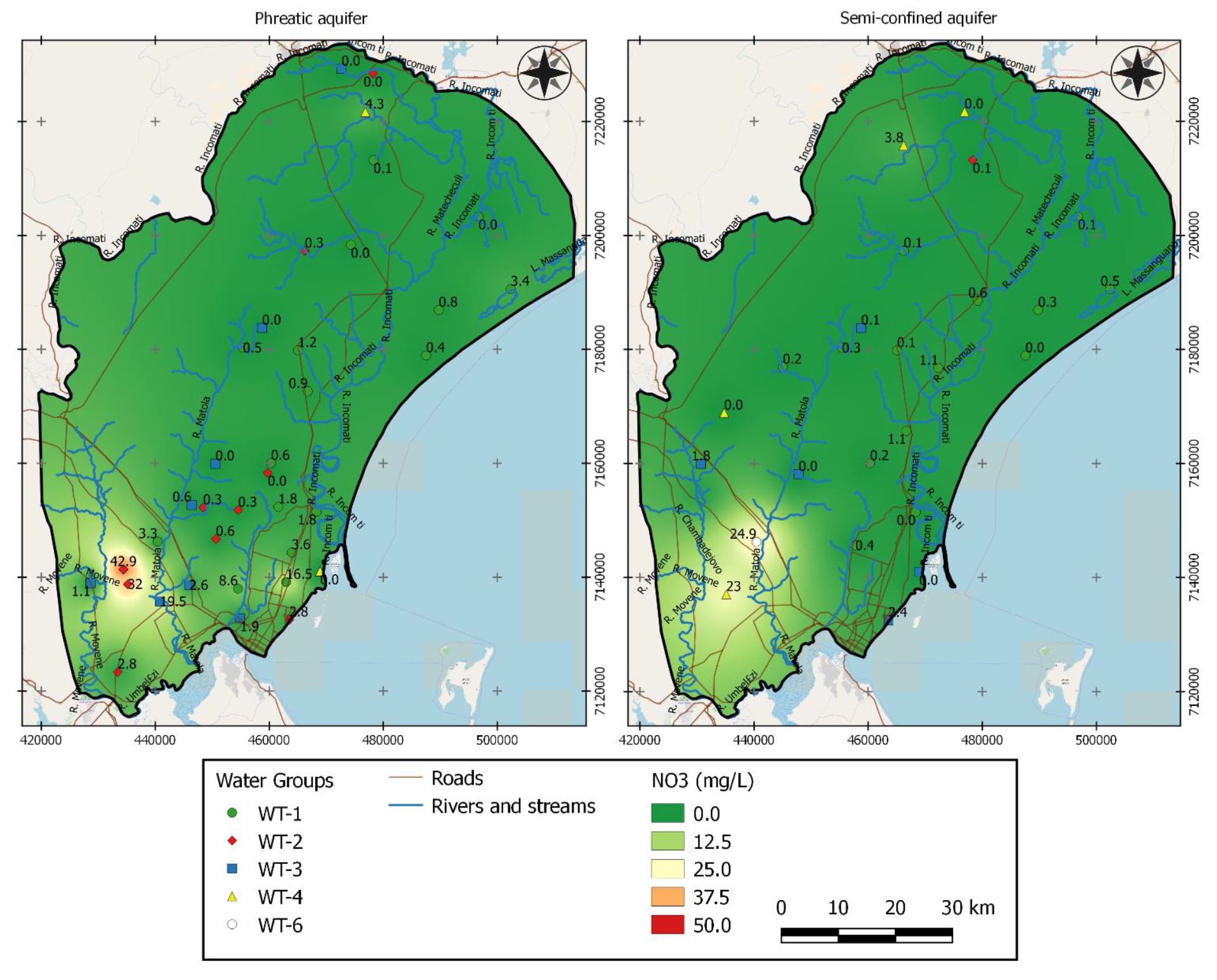 Nitrate concentration in groundwater in the city of Maputo. Two very telling figures: since, at least, the concentrations of Nitrate in the groundwater in Maputo have consistently been above WHO’s limit of 50 mg/L. Sources: Hydroconseil and WE Consult 2011 report (left); MSc thesis of Guilherme Horta (right).

What has been proposed and what else can be done?
As I mentioned above, and given this context I was very interested in understanding how and if the Masterplan would address the issue of groundwater contamination by Nitrate and what I found out really surprised me. I started by comparing the different options within the Masterplan with each other: the impact of fecal-sludge based services vs centralized sewer options and I discovered that each one of them would have a very limited impact. My first reaction was: I must have done something wrong but in the end I understood: groundwater contamination by Nitrate can only be (significantly) addressed with the development of sewer networks and (decentralized) wastewater treatment plants and this is exactly what we discuss in the article: why not building condominial sewers in two of the most densely populated neighborhoods and Maputo, and where the people most rely on pit emptiers to build such infrastructure? We found out that this approach would produce a 30% reduction in Nitrate reaching groundwater when compared to the 10-15% that would be allowed by the Masterplan in its current shape. Again: to read all about this please check the article.

What was the data gathering and model development process?
Something that sometimes is not clear in a research article is the amount of work that was put into each sentence and I would like to make that clear. We needed a lot* of information and to collect it all I had the valuable support of several BSc and MSc students, both from the TU Delft and from other Universities who did their field work in Maputo. Working in Maputo is not easy and I am sure that they learned a lot with their experience here – I’m sure that I did. So, it started with Lena‘s report, at that time we did not have an idea about the volumes of faecal sludge being transported throughout the city. This was quite in-line with the previous report authored by WSP/World Bank and that’s why we teamed up and organized the city-wide survey about which we reported earlier (here, here). At the same time that Lena was doing her survey, Justus and Thijs were calculating how much water flows in the existing sewer network (here). Of course we also used other data sources (e.g. food habits, solid waste production and collection). We were most interested in data about Mozambique but, when this was unavailable, we used data from other African countries and this was mostly Iana‘s work. Iana was also instrumental in developing the mathematical model from my first draft and implementing everything of SIMBOX, which is very difficult to use and I was impressed with how fast Iana mastered it.

Acknowledgements
Finally, I would like to publicly acknowledge all the support given by my co-authors. In particular Iana who implemented most of the model, Ruth who taught us how to use SIMBOX and Luuk for his insightful comments. I would also like to thank Mingming and Nelson for the comments made to the article. Finally, I would like to thank all the students who were in involved in the data collection process.

* My previous students will say that “a lot” is not very scientific – a comment that I make frequently – I hope that you forgive me and accept its use in this instance.

1 thought on “My newest peer-reviewed article”