Three weeks ago, on the 31th of January, I arrived at Maputo International Airport. From then on I would be here alone for the next 11 weeks, working on solutions for water reclamation at the campus of Universidade Eduardo Mondlane (UEM). Exciting! 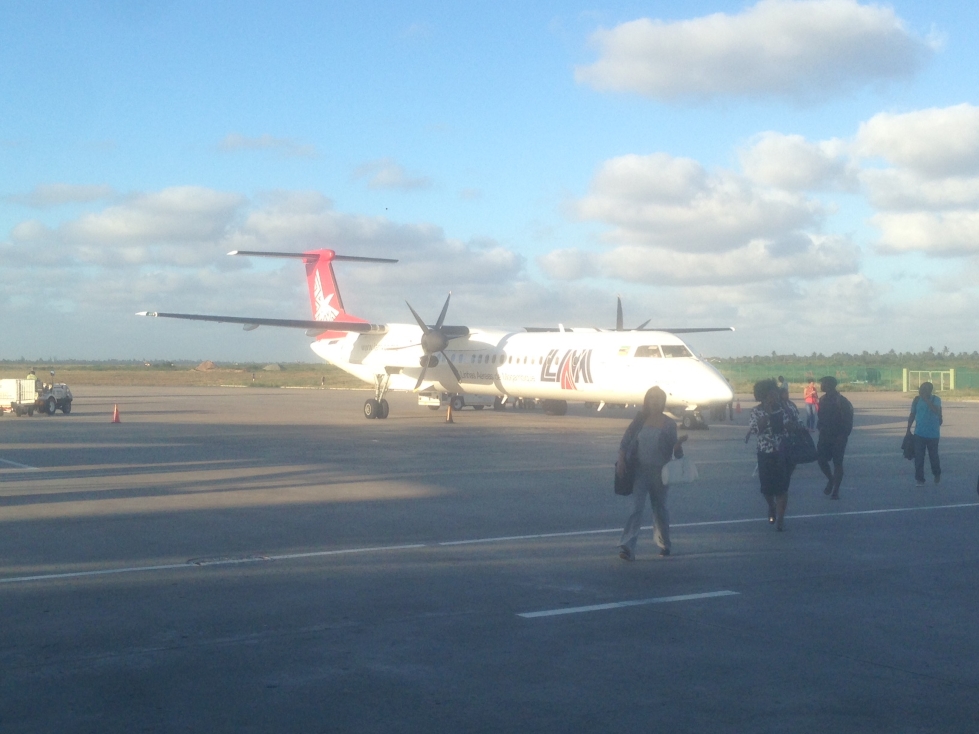 Taking the plane to Maputo.

After getting my luggage I walked to the arrival terminal where I was friendly welcomed by Délio. Délio is a great guy and he helped me a lot the first days, but also later on! The first evening Délio showed me my apartment, which is quite nice, and he showed me the neighbourhood where I am staying; where are the supermarkets, where to go for a dinner, etc. When Délio brought me home and we said Goodbye, I tried to enter the apartment but I realized I had not received the proper keys for the front door. While the guard was telling me to sleep in another room, all my clothes and stuff were in the other room; all the while I kept thinking that this was not the best start for my stay. Fortunately the key of the front door was the same as the key of our neighbours (that is strange right?) so I could enter my room after a lot of stress.

The project started on the 8th of February so the first week was just getting used to Maputo but most of all getting used to the climate. I forgot my laptop charger in the Netherlands, so I had to find another one, again with Délio’s help. I found some nice restaurants, bought a Sim card with internet for my phone, explored the city with some friends I met the first week. In the weekend we went to Tofo Beach, which was very beautiful!

After one week of relaxing and travelling I started with more serious things. The first days I studied the current situation. As we have written before, the current sewage system of Maputo is not operating well. A part of the city-centre is built on a hill and a pressure line is needed to convey the wastewater over the hill to the wastewater treatment plant. However, the two pumping stations are not operating, which means that a large fraction of the wastewater is being discharged into the bay. This situation has lasted more than six years; during this period, an improper connection was made from UEM to the pressure line, which meant that the pumps, even after being repaired could not be operated. More recently, this connection has been removed but there is still a hole in the pipe that has to be fixed, which means that the pumps still cannot be operated. 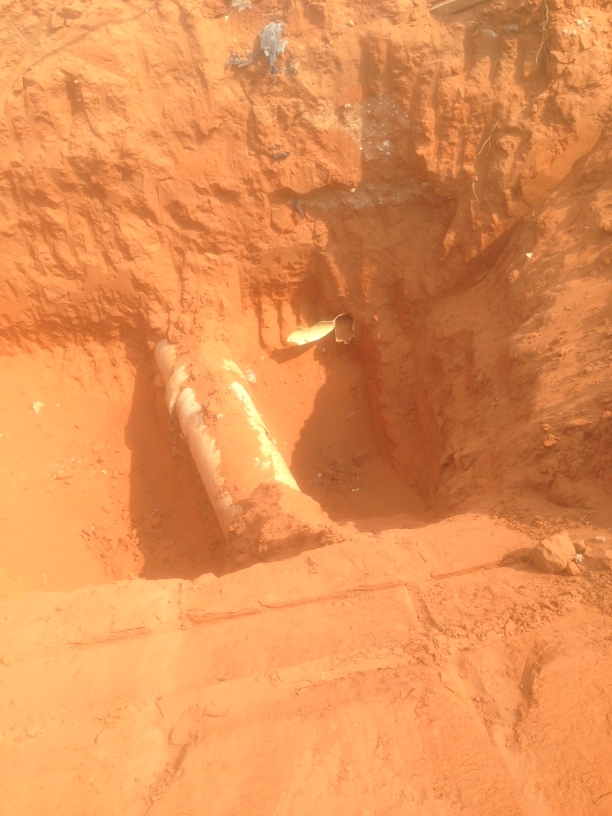 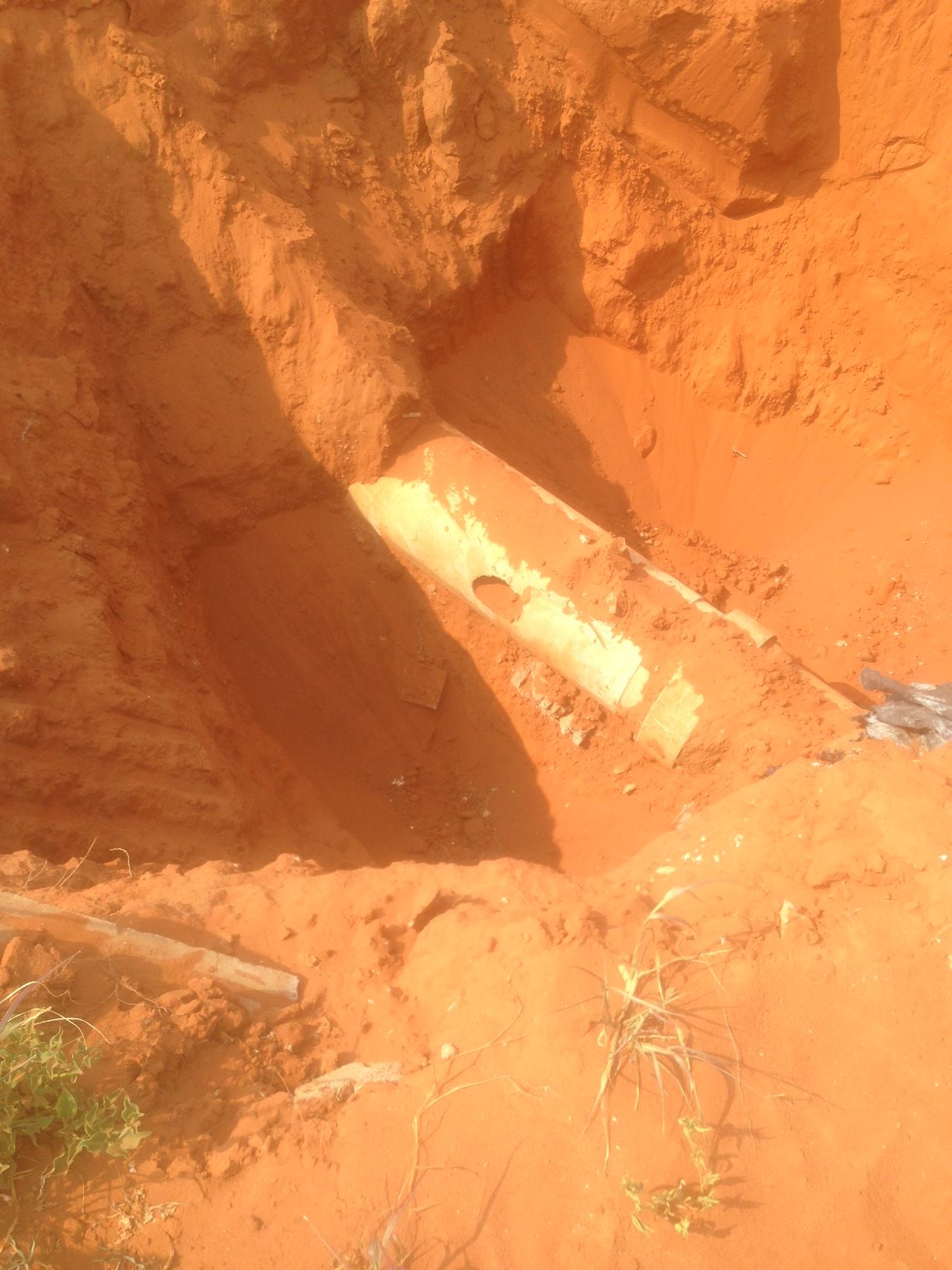 Photos of the hole in the pipe where the connection from UEM was made.

After the problems were identified I made a work plan. My objective is to select and design a robust wastewater treatment system to treat the wastewater produced within UEM campus and reclaim the water for landscaping within the campus. This will be the continuation of the roject of Jesse and Hidde. During week three I identified the issues of the current sewer network of the campus. I met Prof. Cumbane about the digester that he is building. Prof. Cumbane and his student have started testing the digester and I will meet them again in a few weeks. The second interview was with Mr. Congolo, who showed me the main collecting points and the wastewater network around the campus. With this information and a copy of the campus Masterplan started to have a more clear map of the current system. A small part of the wastewater of the university buildings is treated well, but the most of it is not. The wastewater of the Eastern part of the Campus is now discharged into the bay by gravity, but the wastewater of the Western part is conveyed to the WWTP by gravity. Now that I have a clear idea about the current situation I will start on designing solutions.

After three weeks I think I can say I really like Mozambique. The people are friendly and open. There are beautiful beaches and the music is good! I made some friends from Mozambique and they love to show me around and everyone is always really helpful. It is also funny to see that all the young people want to practice their English with me, but I always tell them they have to teach me Portuguese in return. I’m looking forward to the coming weeks because it will become more creative and technical than now. I hope to come up with some nice design the coming weeks!

2 thoughts on “Weeks 1-3: Getting used and getting started in Maputo”