I participated in the first edition of AQUASHARE, in 2016, and it was of my objectives for this year to participate in the second edition as speaker. Thus, a couple of months ago I approached Manuel Alvarinho, President of CRA and one of the organizers of AQUASHARE 2016. Alvarinho then told me then that sponsoring the conference would give us the possibility of having a two-hour workshop on the last day and present to and discuss our project with the water and sanitation sector in Mozambique. This was only possible with the financial support of TU Delft’s program Delft | Global Initiative. Thank you so much.

Background
This year’s conference was attended by more than 180 participants and its slogan was From Vision to Action (Da Visão à Acção, in Portuguese). The conference had, in the organizers own words (my translation), the following main objectives:

This year’s edition has as starting point the results of 2014’s edition that had as objectives participate in the creation of an development agenda for the water sector in Mozambique. Inspired by the discussion started in 2014 the [water and sanitation] sector presented its initial interpretation of the Sustainable Development Goals (SDGs), which will be presented to the main stakeholders [in the near future]. However, the real test will be the implementation of [this view].

[Therefore,] AQUASHARE 2016 aims at contributing to the implementation of this view through the identification and presentation of short-term priority actions. These actions should allow the sector to make good decisions and to produce long-term sectorial plans.

The organizers also schematized the context of the conference in the water and sanitation sector in Mozambique and, as it can be seen below one of its two objectives is the support in defining “Agenda 2030”,  the document that will define the country’s roadmap to reach the SDGs in 2030; you can grab a copy of the draft document here or send me an email if the link stops working. 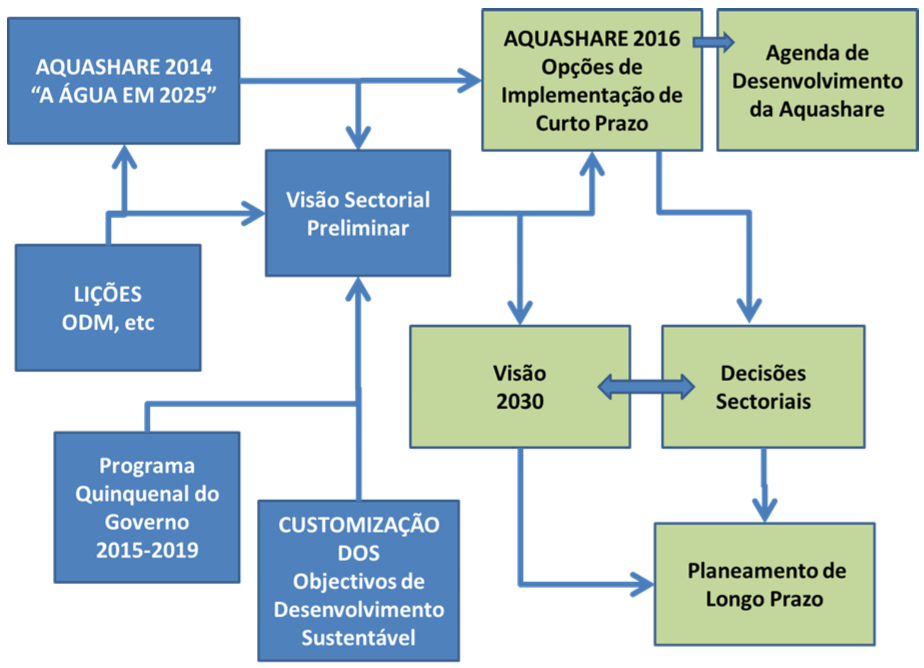 AQUASHARE conference in the context of the water and sanitation sector in Mozambique. I could only find this diagram in Portuguese.

Given the positioning of the conference we were really looking forward to participating – not only these objectives are important for the context of Mozambique, they are also very aligned with our project, especially since the SDGs now make clear references to water reclamation (or water reuse):

The conference started on the 26th of November and before the opening session Mr. Carlos Bonete Martinho, Minister of Public Works, Housing and Water Resources, Mrs. Luisa Diogo former Prime-Minister of Mozambique, and Dutch Ambassador Mrs. Pascalle Grotenhuis were welcomed by Manuel Alvarinho and Mário Macaringue to the sound of traditional music. Afterwards there were opening speeches and a guided tour through the PLAMA fair, where several (non-)government and private entities were present – including the Netherlands Water Partnership. The day ended with a cocktail – a golden opportunity for networking. 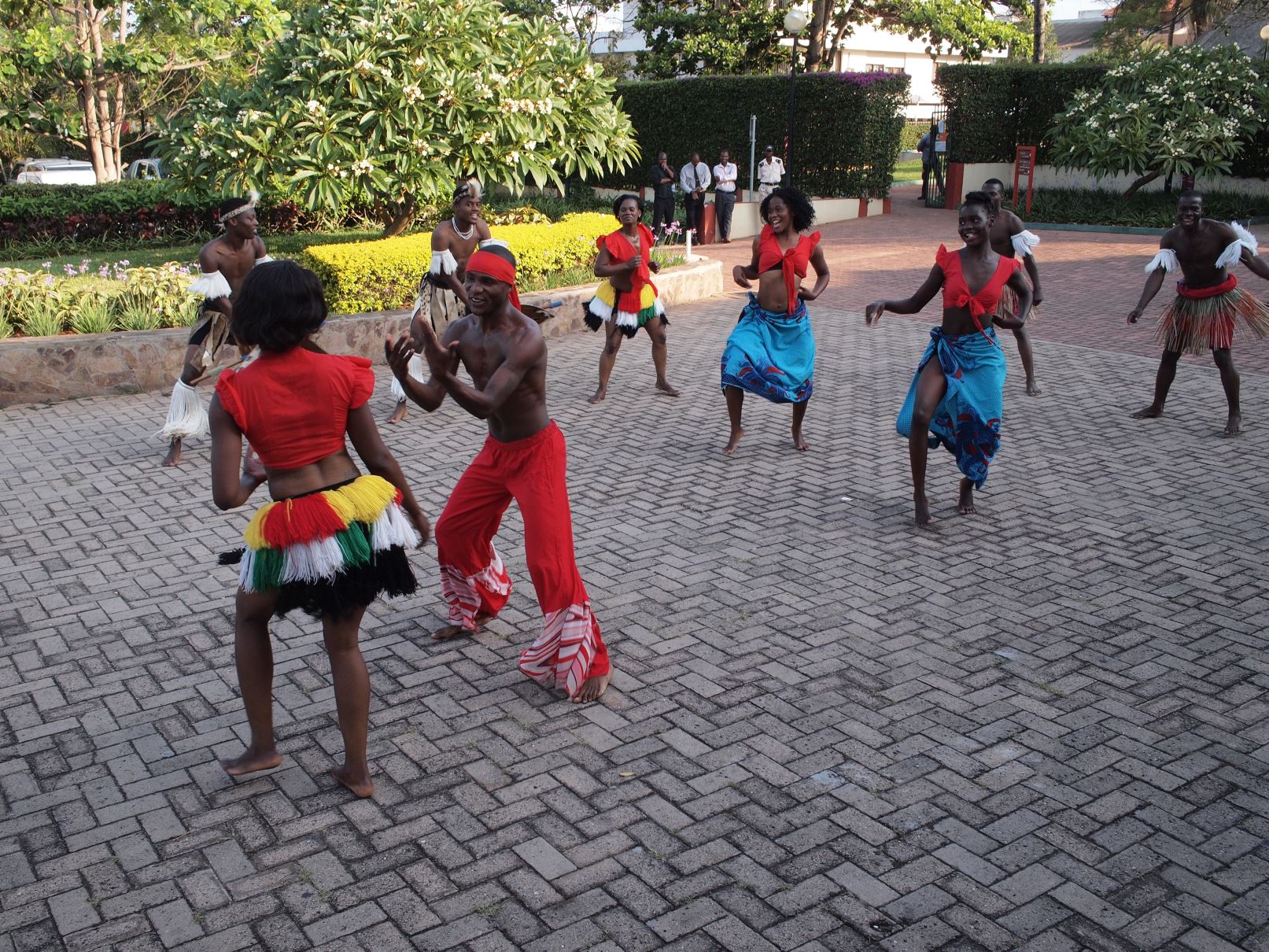 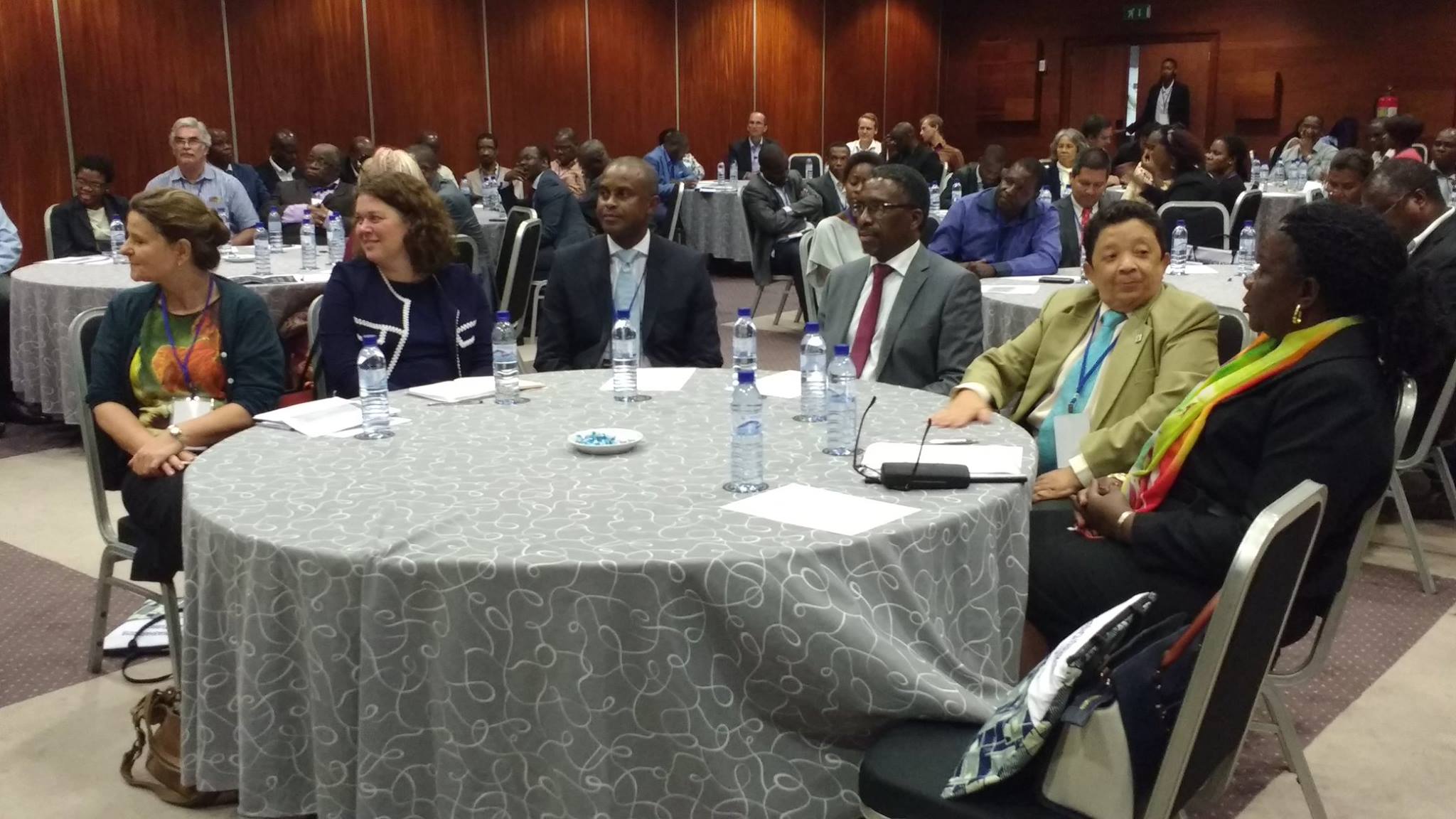 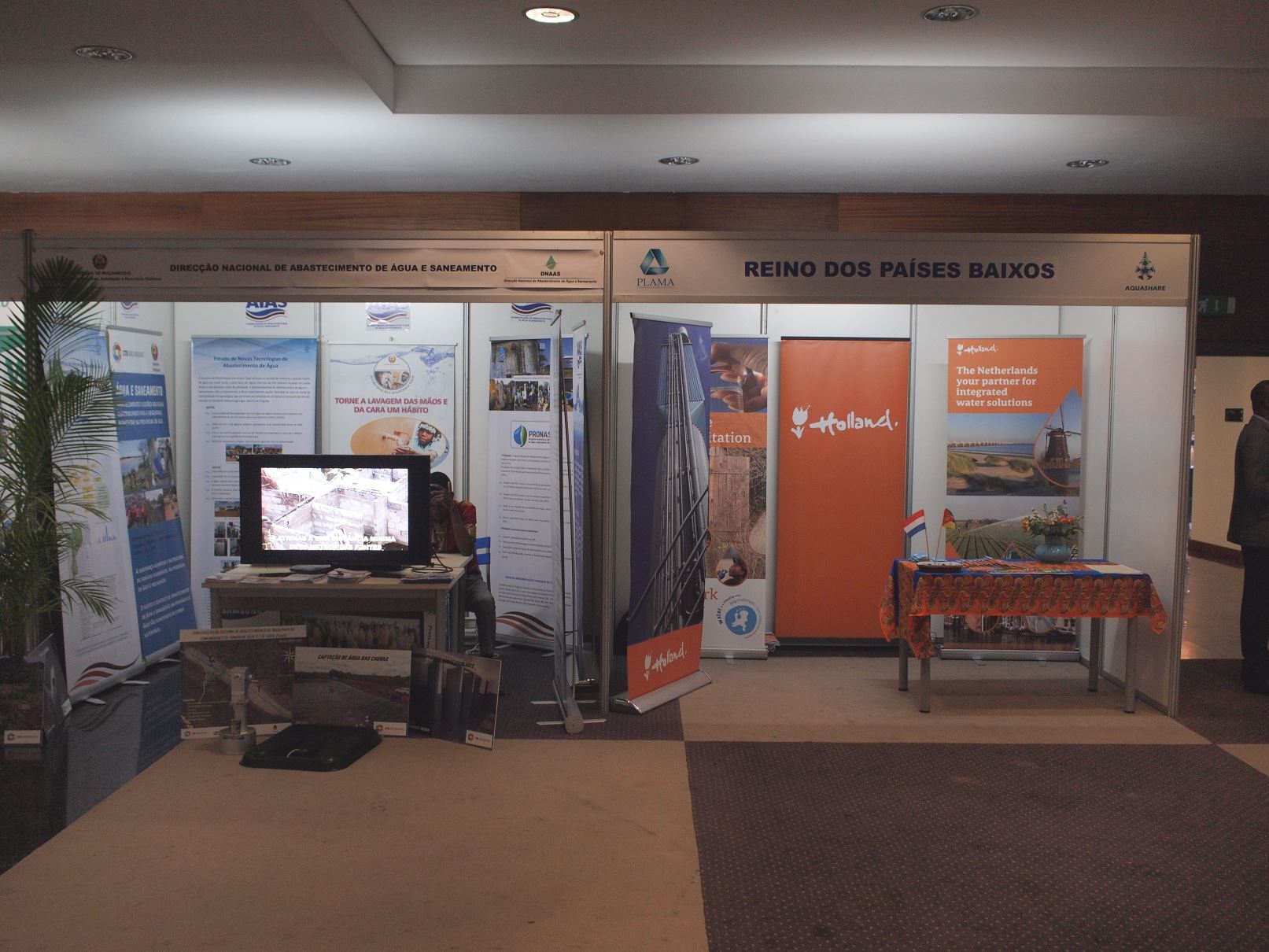 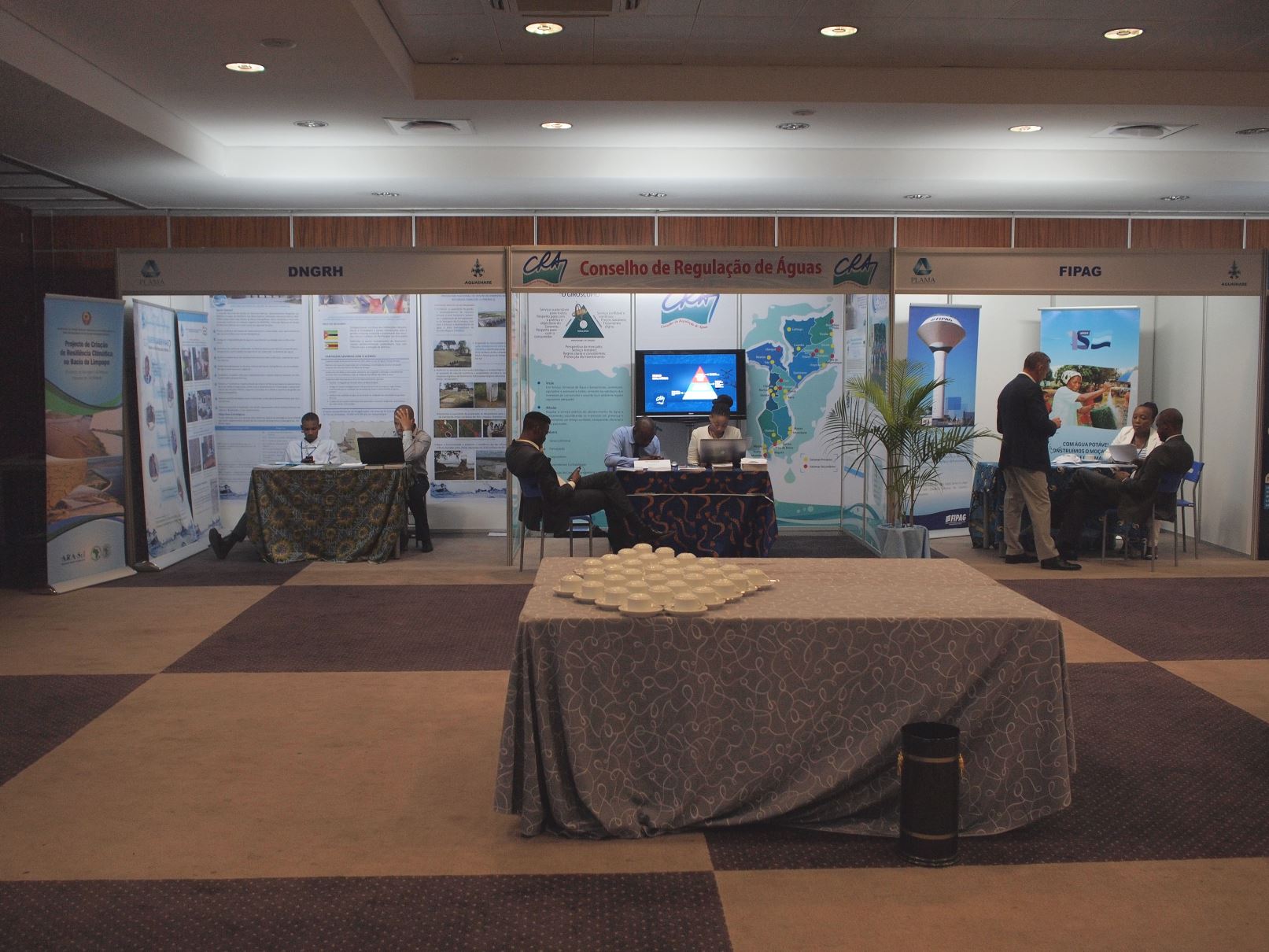 The stands at PLAMA exhibition – there was a Dutch stand (left).

This was the busiest day of the conference and there were four plenary sessions. In the morning, the first session discussed policies and sectorial strategies; the second sessions focused on the main stakeholders in the water and sanitation sector and these should adapt to the face the challenges in the SDGs. After lunch there were other two sessions. While the first discussed financing for the water and sanitation sector, the second looked into trans-sectorial issues, such as climate change and poverty alleviation.

We started the day by working in groups and while I joined the group discussing “Policies and sectorial strategies”, Noor and Celma joined the trans-sectorial group. All groups had to cover water supply, sanitation and water resources management. Right after we had our two-hour water reclamation workshop which was followed by the closing speeches, including that of Mr. Carlos Bonete Martinho. The day (and the erence) ended with a lunch in the Hotel’s restaurant. Somewhere in between I had the opportunity of getting video feedback on our project from two local stakeholders to add to those of Lizete Dias (ARA Sul) and Gildo Timóteo (Águas da Região de Maputo) – more information will follow in the next few weeks. 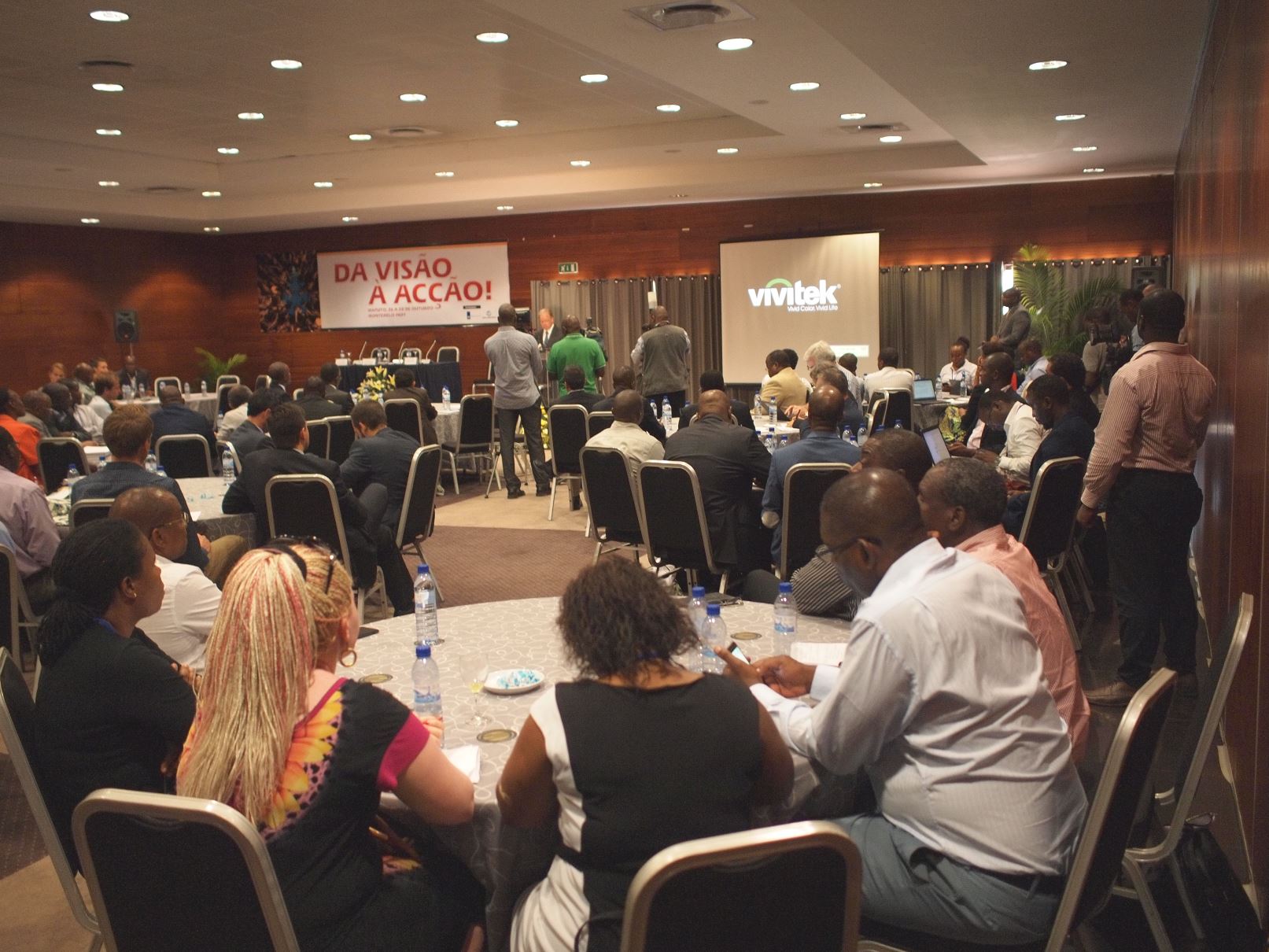 One of the closing speeches being given by Mr Mark Lundell (World Bank).

The room was full, with about 40-50 participants, and the session started with a 20 min presentation given by me (you can find it here), followed by four 5-min comments from the other four members of the table:

The four invitees covered the many aspects of a potential water reclamation project, water supply (Mr. Paulino), water policy (Mr. Daúde), water usage (Mr. José) and consultancy, construction and management of supply systems (Mr. Pedro). All four invitees said that they understand the need to protect the (ground)water sources, the importance of supplying good-quality drinking water to households and the possibility (and relevance) of selling lower-quality water to users (e.g. industries) that do not really need tap water – the perfect example is Ribemoz that already saves 30% of its water through a recycling setup to wash their cement trucks. This was followed by a Q&A session with the questions varying from economic feasibility, health risk associated with water reclamation, the role and participation of DNAAS, the impact of existing sanitation infrastructure’s condition in the implementation of the project. We made the following points: 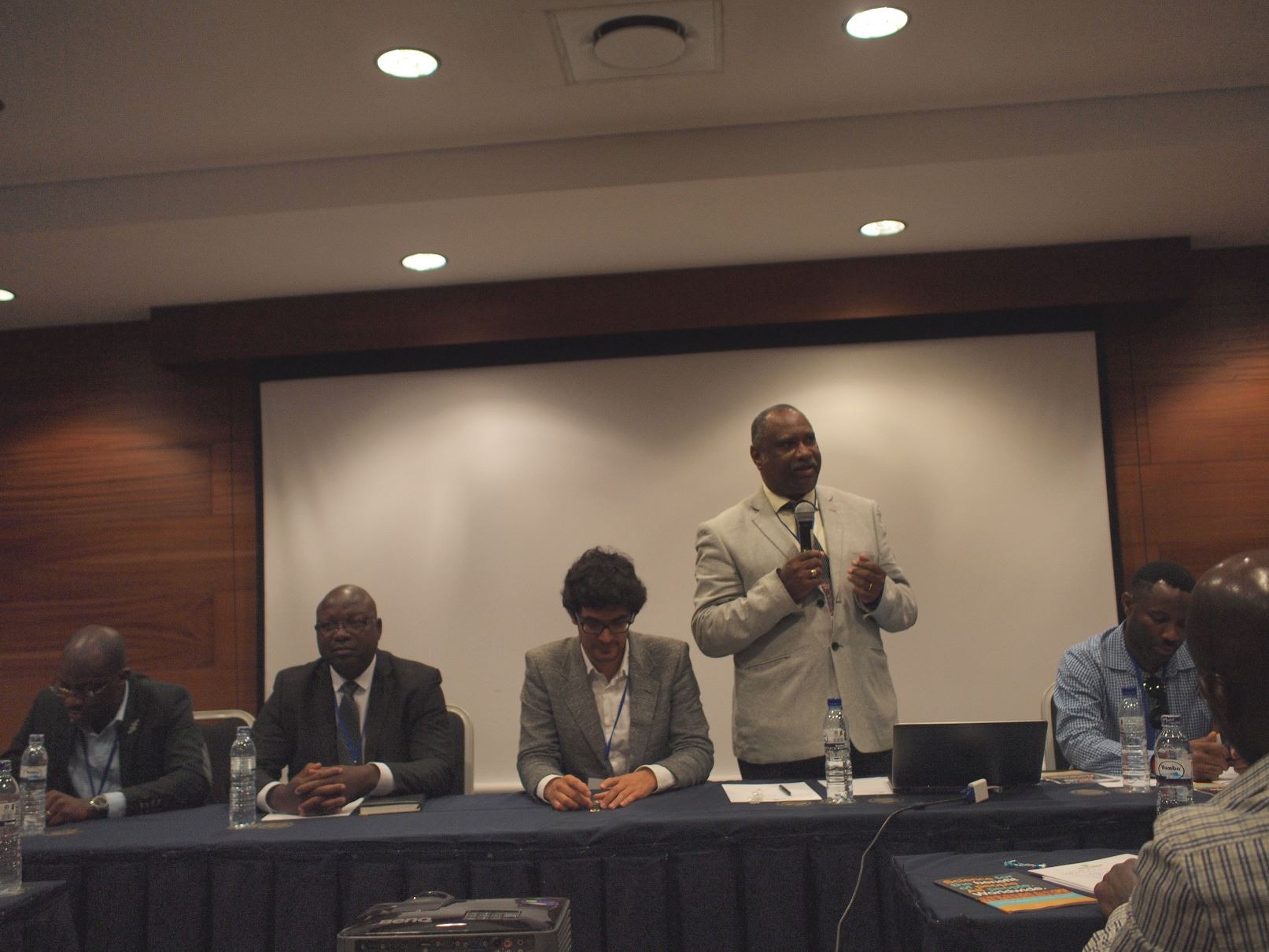 Our workshop was, once again, a great opportunity to present our project and interact with local stakeholders. Our good selection of speakers also allowed us to further interact with those stakeholders that can play a major role in the forthcoming years, in particular when the PhD candidates start their field-work and building and running their pilots. Of particular importance was the presence of Ribemoz – a company that already has a water recycling setup for truck washing. Such examples show that water saving approaches are economically feasible also in the context of Maputo. 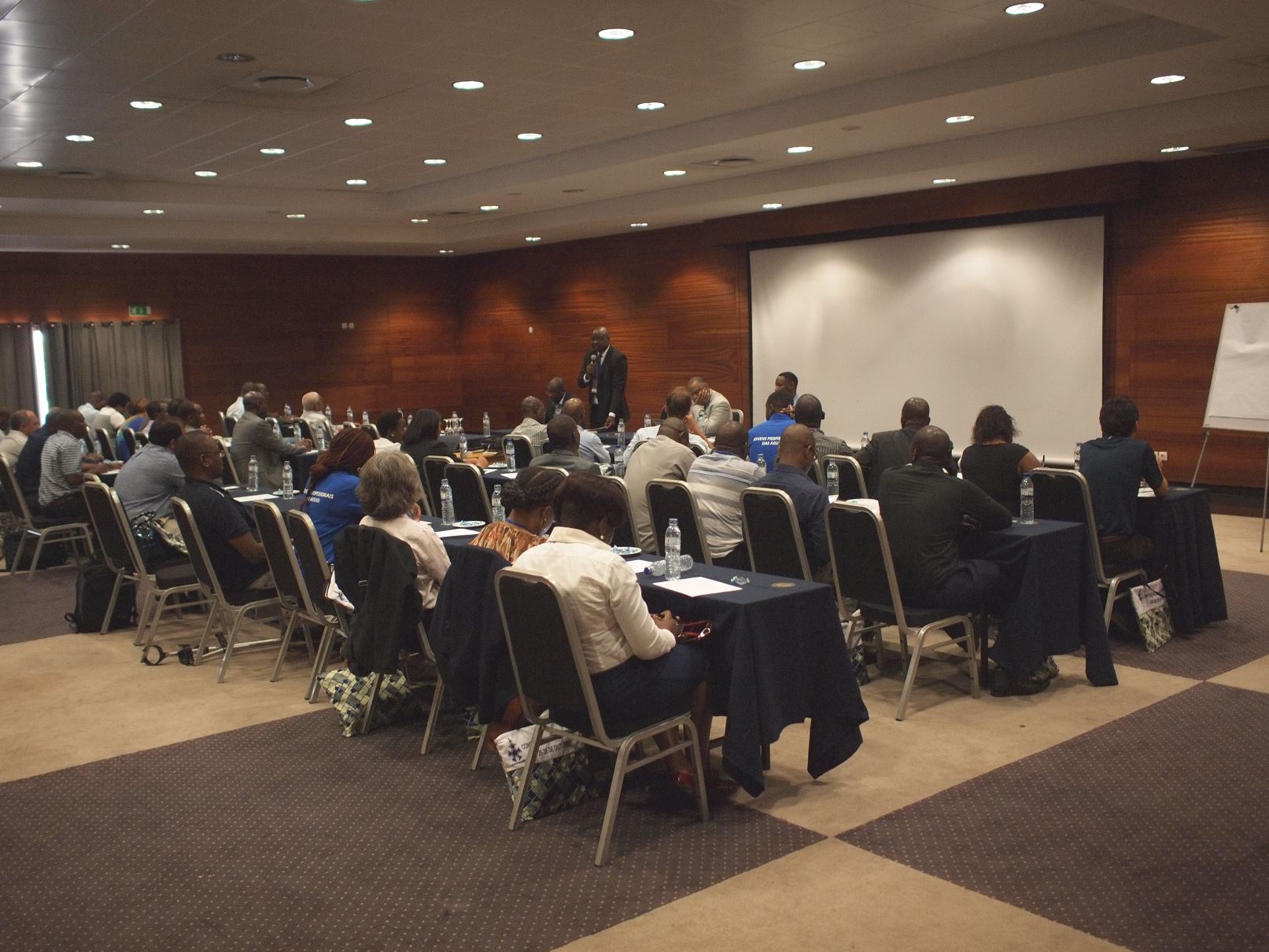 The room was full for our workshop.

I personally felt that the speeches (first and third days) and presentations (second day) were too political, cautious and void of content. I don’t think that the content of the conference actual supports the Government of Mozambique is understanding the way towards achieving the SDGs. The only exception was a work presented by the World Bank where correlations between limited access to water and sanitation services and limited learning and stunting in children were found. Despite not being exactly new, it was the first time that I saw such conclusions for the Mozambique. The authors also showed that this was even more the case in the North of the country, in particular in the rural areas.

Thus, the approach followed by the organizers and by most of the speakers was, in my opinion, a missed opportunity – the SDGs for water and sanitation are very ambitious on their own, for example:

Now, if you consider that Mozambique did not reach the MDGs for improved sanitation facilities and water sources, a paradigm change is necessary. This should probably start by understanding what went wrong with the road towards the MDGs, and what must be done differently with the SDGs until 2030. I believe that one of the reasons (and this was often mentioned during the conference) is the need for a clear definition each stakeholder’s tasks but, also important, the sector needs to find a clear leader who defines the way forward and who is not afraid of failing while doing so.

In fact, as I said in the beginning, AQUASHARE 2016 could have been the ideal forum to openly discuss, for example, what does “adequate and equitable sanitation” (Goal 6.2, above) means and I would have been very happy if this would have been brought-up during the conference. It would have been even better if the discussion would have gone a step further – how can these concepts be parametrized and translated into indicators? A couple of ideas:

In any case it would have been necessary to present baselines, feasible goals and, very importantly, budget allocation for the next one, three and five years. It seems that this work is being done but not openly and, in my opinion, that is, as I said already, a missed opportunity.

This year’s conference gave me mixed feelings. I did not like it as much as last time nor as much as I had anticipated. I also found it somewhat more political, with less open discussions than last time. Could this be the reflex of the present political and economic situation in the country? I’m not sure. On the other hand, I really enjoyed our workshop and I do believe that once again we showcased very well our project and demonstrated to the local stakeholders that the project is running and that we expect results in the short-term. Finally, I would like to once again thank TU Delft’s program Delft | Global Initiative. Without their support none of this would have been possible.